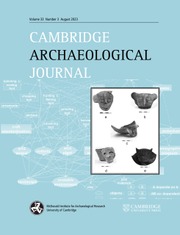 Repair, Recycle or Re-use? Creating Mnemonic Devices Through the Modification of Object Biographies During the Late Bronze Age in Switzerland

The biographical approach has been applied to many studies of European prehistoric metalworking which frequently discuss the potential for recycling metalwork through melting to create new objects, drawing influence from the many ‘founders hoards’ known from across Europe. An agglomerate of half-molten bronze objects from Switzerland suggests that such recycling practices occurred there, although previous archaeometallurgical analysis has indicated that such practices were temporally limited. This article focuses on an alternative form of recycling — the direct conversion of one object into another through cutting and reshaping — observed on several razors from Late Bronze Age (LBA) lake-dwelling contexts in Switzerland. Atypical decorative motifs on these razors identify them as having been cut from arm- or leg-ring jewellery pieces. It is suggested that these ‘ring-razors’ were valued as individualized objects and created as personal mnemonic devices.

Repair, Recycle or Re-use? Creating Mnemonic Devices Through the Modification of Object Biographies During the Late Bronze Age in Switzerland
×

Repair, Recycle or Re-use? Creating Mnemonic Devices Through the Modification of Object Biographies During the Late Bronze Age in Switzerland
×

Repair, Recycle or Re-use? Creating Mnemonic Devices Through the Modification of Object Biographies During the Late Bronze Age in Switzerland
×
×