The NATURE OF CONVERSION 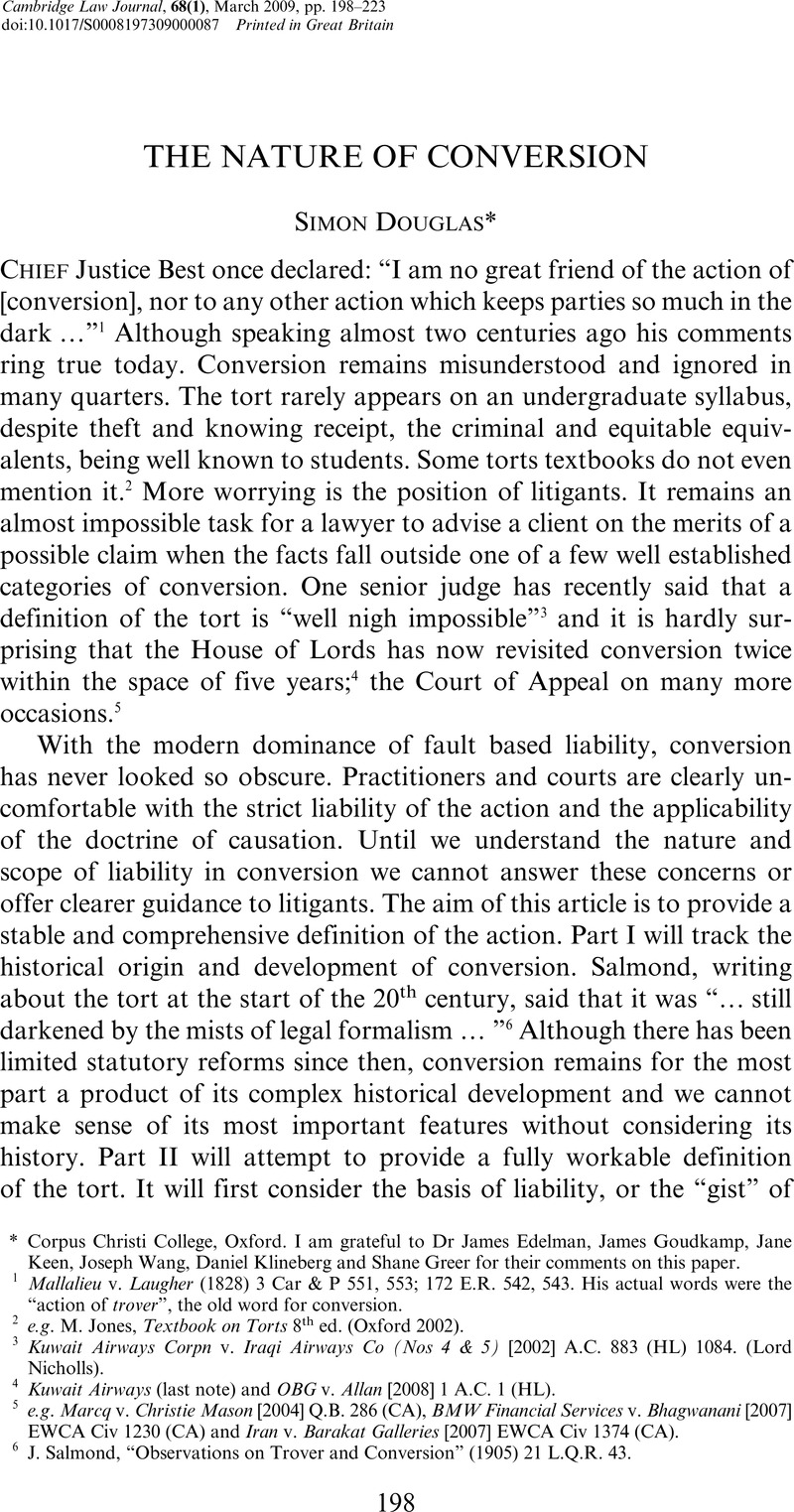 7 The “demand and refusal” hardened into a strict requirement in detinue's later history. This meant that even a defendant who, by his conduct, had made it clear that he intended to keep the claimant's chattel, could not be sued in detinue until a demand and refusal had been made: Clayton v. Le Roy [1911] 2 K.B. 1031 (CA). See generally S. Douglas, “The Abolition of Detinue” [2008] Conv. 30.

8 A passage from Blackstone (3 Comm. 152) mentions these two features: “If I lend a man a horse and he afterwards refuses to restore it, this injury consists in the detaining and not in the original taking, and the regular method for me to recover possession, is by the action of detinue.”

11 So called as it was once thought that the jurisdiction of the central courts was expanded by a 13th century statute that allowed the courts to hear complaints that were “in like cases” (in consimili casu): J.H. Baker, An Introduction to English Legal History, 4th ed. (London 2002), 62.

18 As the defendant would no longer be detaining the claimant's goods.

21 The claim eventually failed as the defendant argued that she was still in possession and that detinue was the appropriate action.

24 Salmond would later write that a “disposal” was the original form of conversion. See Salmond “Observations on Trover and Conversion” (1905) 21 L.Q.R. 43, 44. Although not strictly correct, a disposal was the type of act that fitted most naturally within the “conversion” allegation.

35 Law Reform Committee, “Conversion and Detinue” (Law Reform Com No 18 Cm 4774, 1971) 4. The only exception was where a bailee had negligently lost the claimant's chattel.

90 B & M 536. There is no recorded verdict however. For commentary on the pleading in the case see Ibbetson, Historical Introduction to the Law of Obligations, 112.

104 A similar approach is taken towards consequential loss. It is only consequential losses that a claimant can prove that he has actually suffered that are recoverable: Brandeis Goldschmidt Ltd v Western Transport Ltd [1981] Q.B. 864 and Williams v Peel River Land & Mineral Co (1886) 55 L.T. 689.

The NATURE OF CONVERSION
×

The NATURE OF CONVERSION
×

The NATURE OF CONVERSION
×
×