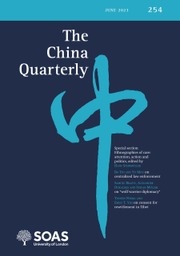 Red and Expert: The Revolution in Education at Shanghai Teachers’ University, 1975–76

Educational policy is of central significance in revolutions because it determines both the nature of the leadership and the policies to promote social change. It has been an explosive issue in China where a Marxist revolution has predated the establishment of a developed economic base and a mature urban proletariat.(The “red versus expert” debate which has reverberated in China since 1949 has been a by-product of the struggle to promote the growth of the economic infrastructure while maintaining radical political institutions and attitudes)1 In Mao Zedong's view this struggle represented not the conflict of two irreconcilable principles but the dynamic relationship between two complementary ingredients of China's educational process.2

* From April 1975-March 1976 I studied and taught in China with Bruce Kent, who, under a cultural agreement between Australia and China, was appointed Australia's first “foreign expert” (waiguo zhuanjia) teaching English at Shanghai Teachers’ University. After a few months as a student at the Peking Language Institute I returned to Shanghai to teach English to the eight classes of third-year students at the university. In writing this article I am indebted to Bruce Kent for his invaluable notes and critical comments. I wish also to thank Professor Wang Gungwu for his helpful suggestions and the staff, teachers and students of Shida.

2. The relationship was most clearly articulated by Mao in his “Method of work“(draft) January 1958: “The relationship between redness and expertise, between politics and work, stands for the unity of opposites. It certainly is necessary to criticize and repudiate the tendency to ignore politics. It is necessary to oppose the arm-chair politician on the one hand and the practicalist who has gone astray on the other. There is no question that politics is unified with economics and techniques. This is called red and expert....Ideological work and political work guarantee the accomplishment of economic work and technical work and they serve the economic foundation. Ideological and political work is the supreme commander as well as the soul. Once we are slack with ideological and political work, economic and technical work will go astray.” Current Background, No. 888, pp. 7–8.Google Scholar

3. A definition of a teachers’ (normal) university is given in Theodore Ch’en, Teacher Training in Communist China, U.S. Department of Health, Education and Welfare (OE-14058) (December 1960), p. 14: “ There are three forms of higher normal education: the higher normal university, the higher normal college and the higher normal professional school. All admit students who have completed secondary education and those of equivalent standing. The normal college and the normal university both offer four-year courses; the main difference between the two is that the latter has more departments and more elaborate organization than the former. They both train teachers for the senior middle school and other secondary schools, including the normal school.” This definition remained true for the 1975–76 period, except that the courses had been shortened to three years. A further distinction is that whereas the teachers‘college caters for local students, the teachers’ university takes students from its own and other provinces and supplies teachers to those areas.Google Scholar

4. Statistics prior to changes in the university's status are provided in Kiriloff, C., “Shanghai Teachers’ University,” in Report of the Visit to the People's Republic of China by an Australian Language Teaching Delegation (Canberra: Department of Education, September 1977), pp. 70–73.Google Scholar

5. Worker-teachers must be distinguished from newly graduated worker-peasant-soldier teachers. The former were peasants or workers taken from a factory and given a short training course to become a teacher; the latter, whose social status was higher, were children of Shanghai citizens, often cadres, who spent two or three years in the countryside before proceeding to the normal three-year teacher training course.

6. Defined for us as a cadre rather than student category.

7. Open-door schooling was defined as a combination of going outside the university to take part in labour (canjia laodong) and study, usually for extended periods, whereas labour (laodong) was a short-term form of manual labour which was usually performed in the university grounds.

9. Unlike other aspects of the “ returning tide “ (huichao) of 1972, which sought to revert to pre-Cultural Revolution educational policies, this change was not subsequently reversed.

10. That this was still the case after 1976 was suggested by Zhang Xuexin: “ If they [the youth of the new China] settle down in the countryside, then they are reclassified as peasants. They are considered to be peasants when they enter university.” Quoted in Suzanne Pepper, “An interview on changes in Chinese education after the ‘gang of four,’ “ CQ, No. 72 (December 1977), p. 823.Google Scholar

11. In his Ph.D thesis, The Evolving Concept of Class in Post-Liberation China, R. C.Kraus has observed: “ In China the practical application of class has often made a radical doctrine of class struggle quite compatible with a static system of social statuses.” Although referring in this observation to the anachronistic application of pre-1949 class categories on to the contemporary Chinese scene, for which he saw the Maoist redefinition as an important corrective, the Kraus statement in fact applies equally to the Maoist behavioural criterion of class. A redefined political status based on behavioural criteria could, as we remarked, have the effect of taking benefits owing to those former economic classes now enjoying a high political status, the poor and lower middle peasants and unskilled workers, and transferring them to children of cadres and intellectuals lacking in political status but high in social status. For the additional category of political status introduced into the system since Liberation had modified but not in practice eliminated the social status categories of pre-1949 China. It was not the case, at least in 1975–76, that political status and social status were identical, as Kraus seemed to assume. It was simply, as we shall see later, that two different status systems coexisted. Intellectuals, for instance, had generally a low political status but a high social one: for peasants and workers the reverse applied.

12. At the same time, it must be pointed out that Shida's statistics in this respect appear to differ from other universities and institutes catering for national needs; the Shanghai Foreign Languages Institute, for instance, cited a figure of 30% for peasant representation among students, even if it remained unclear whether “peasant” meant original peasant or “worker-peasant-soldier” peasant. This figure may also have included the large People's Liberation Army contingent studying Russian at the Institute. Apart from their class origins, Shida students chosen from the cadre/worker families enjoyed the highest political credentials. A conservative estimate, supplied by teachers, was that one-fifth of each class were Party members and almost all the rest members of the Communist Youth League; in one particular class we were told that three-quarters of its members belonged to the Party and the rest were CYL. 13. Figures supplied by university cadres during our visit to the cadre school.

14. A fourth category, the workers in the university factory, were situated on the main campus and are not included in this study.

15. The students’ equanimity in accepting this division of responsibility was another instance of the way in which they compartmentalized political and educational functions.

17. That this was also the case in the 1950s has been asserted by Ch’en, Teacher Training in Communist China, pp. 34–38.Google Scholar

18. This message was a consistent theme in all sections of the media, particularly in films of the period, such as Red Rain (Hong yu). Spring Seedlings (Chunmiao) and The Young Pioneers, a Shanghai production filmed in late 1975 on Shida's branch campus.

19. No statistics were provided of the number of students of worker origin; individual students all claimed their parents were workers, defining “worker” as “one who worked”; on further questioning the “worker” parent was sometimes revealed as a middle-ranking or even leading cadre; one of the indicators of class status was the location in Shanghai of the family home.

25. As White, Gordon demonstrated in “The politics of hsia-hsiang youth,” CQ, No. 59, (July-September 1974), p. 516, the attitudes of educated youth reflect “modern elitist” patterns of thought rather than “old” or “gentry” thought: “The rural-urban factor appears to be the basic determinant of social stratification in contemporary China…the urban sector has been homogenized in the sense that youth would prefer an urban manual job than even a mental job in the countryside.” Although his term “homogenization” exaggerates the real degree of intellectual-worker integration, intellectual-worker relations should be seen as merely a minor contradiction against the major urban-rural contradiction.Google Scholar

Red and Expert: The Revolution in Education at Shanghai Teachers’ University, 1975–76
×

Red and Expert: The Revolution in Education at Shanghai Teachers’ University, 1975–76
×

Red and Expert: The Revolution in Education at Shanghai Teachers’ University, 1975–76
×
×