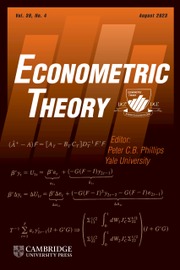 Phoebus J. Dhrymes is one of the best known econometricians of the last 40 years. He has made substantial contributions to econometric theory through articles in leading journals and by way of a series of outstanding texts on the foundations and methods of econometrics. His early research began with an applied econometric focus on problems of production and investment. His later contributions concentrated on the foundations of econometric methodology, including systems of simultaneous equations. Throughout the econometrics community, Dhrymes is well known for his influential textbooks, some of which have been translated into several languages. His 1970 book Econometrics: Statistical Foundations and Applications provided an accessible and rigorous foundation for both students and teachers of econometrics. His subsequent books have continued to treat foundational issues and have tracked new areas of econometric interest through to his 1998 book Time Series, Unit Roots, and Cointegration. Reading his books reveals Dhrymes as a teacher, synthesizer, and master expositor. As he says in the interview that follows, “my books are not typical textbooks. I perceive them more as books that bridge the gap between ordinary textbooks and journal articles and as filters that distill and synthesize the wisdom of many contributors to the subject. On this score I was influenced in my writing by the way I learn when studying by myself.”