Prevalence of suicide attempts in bipolar disorder: a systematic review and meta-analysis of observational studies

Bipolar disorder (BD) is a severe psychiatric disorder associated with a high risk of suicide. This meta-analysis examined the prevalence of suicide attempts (SA) in patients with BD and its associated factors.

A systematic literature search was conducted in the PubMed, PsycINFO, EMBASE and Web of Science databases from their inception to 11 June 2018. The prevalence of SA in BD was synthesised using the random-effects model.

The search identified 3451 articles of which 79 studies with 33 719 subjects met the study entry criteria. The lifetime prevalence of SA was 33.9% (95% CI 31.3–36.6%; I2 = 96.4%). Subgroup and meta-regression analyses revealed that the lifetime prevalence of SA was positively associated with female gender, BD-I, BD Not Otherwise Specified and rapid cycling BD subtypes, income level and geographic region.

This meta-analysis confirmed that SA is common in BD and identified a number of factors related to SA. Further efforts are necessary to facilitate the identification and prevention of SA in BD. Long-term use of mood stabilisers coupled with psycho-social interventions should be available to BD patients to reduce the risk of suicidal behaviour.

Two authors (MD and LL) independently screened the title and abstract of relevant studies and then read their full text for eligibility. Inclusion criteria were: (1) BD diagnosed according to any international or local diagnostic criteria; (2) available meta-analysable data on SA with one or more of the following timeframes: lifetime, 1-year, 1-month, current episode and from illness onset; (3) cross-sectional or cohort studies (only baseline data of cohort studies were analysed); (4) publication in English. Studies were excluded if they (1) were intervention studies or reviews; (2) had very small sample size (n < 100) (Walker et al., Reference Walker, Holm Hansen, Martin, Sawhney, Thekkumpurath, Beale, Symeonides, Wall, Murray and Sharpe2013; Matte et al., Reference Matte, Pizzichini, Hoepers, Diaz, Karloh, Dias and Pizzichini2016) or special populations, such as adolescent or elderly samples; (3) were registry-based studies or extracted data from medical records. If multiple papers were published based on the same dataset, only the study with the largest sample size was analysed. Several papers (such as Carballo et al., Reference Carballo, Harkavy-Friedman, Burke, Sher, Baca-Garcia, Sullivan, Grunebaum, Parsey, Mann and Oquendo2008; Elizabeth Sublette et al., Reference Elizabeth Sublette, Carballo, Moreno, Galfalvy, Brent, Birmaher, John Mann and Oquendo2009; Studart et al., Reference Studart, Galvao-de Almeida, Bezerra, Caribe, Afonso, Daltro and Miranda-Scippa2016) reported overlapping data with the included studies. The corresponding authors were contacted for clarification, but since no reply was received, therefore these studies were excluded. Any uncertainty in the literature search and study selection was resolved by a discussion with a senior researcher (YTX).

Study quality was assessed using the quality assessment instrument for epidemiological studies (Boyle, Reference Boyle1998; Loney et al., Reference Loney, Chambers, Bennett, Roberts and Stratford1998); which has the total score ranging from 1 (lowest quality) to 8 (highest quality) points. The eight domains of the instrument are: (1) Target population is clearly defined. (2) Probability or entire population sampling is used. (3) Response rate is >70%. (4) Non-responders are clearly described. (5) Sample is representative of the target population. (6) Data collection methods are standardised. (7) Validated criteria are used to assess the presence of disease. (8) Estimates of prevalence are given with confidence intervals and detailed by subgroup (if applicable). Studies with a total score of 7–8 were considered as high quality, 4–6 as moderate quality and 0–3 as low quality (Yang et al., Reference Yang, Zhang, Zhu, Zhu and Guo2016).

Data analyses were performed with the Comprehensive Meta-Analysis (CMA), Version 2.0 (Biostat Inc., Englewood, NJ, USA) and STATA, Version 12.0 (Stata Corporation, College Station, TX, USA). A random-effect model was applied to calculate the overall prevalence and its 95% confidence interval (95% CI). Heterogeneity between studies was assessed with the I 2 statistic. Sensitivity analysis was performed by excluding studies one by one to explore the impact of each study on the overall results. Publication bias was evaluated with funnel plots and the Begg regression asymmetry test. In order to examine the moderating effects caused by demographic and clinical variables on the results, subgroup analyses for categorical variables (rapid cycling, gender, source of patients, income level, region and study design) and meta-regression analyses for continuous variables (per cent of BD subtype, sample size, mean age, illness duration and age of onset) were performed. If the number of studies was <10, subgroup analyses were conducted for continuous variables, using the median splitting method (Higgins and Green, Reference Higgins and Green2008). All the tests were two-tailed, and p < 0.05 was considered significant. 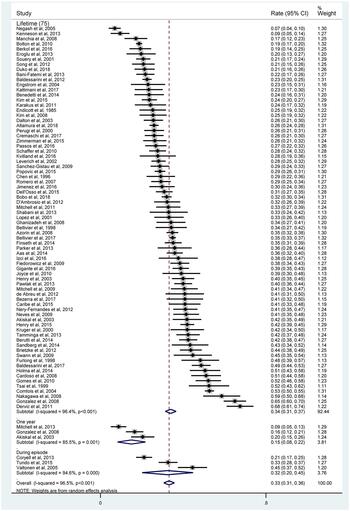 When sensitivity analysis omitted each study one by one, there was no outlying study that could have significantly changed the lifetime prevalence of SA (online Supplementary Fig. S1). Neither the funnel plot nor Begg's test found significant publication bias with respect to the lifetime prevalence of SA (z  =  0.76, p  =  0.44) (online Supplementary Fig. S2).

a Test of heterogeneity within subgroups.

b Test of prevalence of SA across subgroups.

The sample size was negatively correlated to the lifetime prevalence of SA. Results of studies with small sample size are less reliable (Dong et al., Reference Dong, Wang, Wang, Zhang, Ungvari, Ng, Meng, Yuan, Wang and Xiang2017). The higher 1-year prevalence of SA was found at baseline of cohort studies than in cross-sectional studies, while there was no group difference between lifetime and current episode prevalence between the two types of studies. Again, it is likely that the low number of cohort and cross-sectional studies resulted in unstable results.

The results of this meta-analysis should be interpreted with caution because of several methodological limitations. First, relevant factors related to SA, such as pharmacotherapy, comorbidities, illness severity and the actual mood state of BD, were not reported in most studies, hence their moderating effects on SA could not be explored. Second, publication bias of the 1-year and current episode prevalence of SA could not be assessed as the number of studies was <10 (Wan et al., Reference Wan, Hu, Li, Jiang, Du, Feng, Wong and Li2013). In addition, the pooled current episode and 1-year SA prevalence estimates and the SA-moderating effects of the region and low-income countries were examined in a small number of studies, therefore the findings are only preliminary. Third, most studies were conducted in the Americas and Europe, making the generalisability of findings limited. Fourth, although subgroup analyses have been performed, heterogeneity could not be avoided as it is a common pitfall in the meta-analysis of epidemiological studies (Winsper et al., Reference Winsper, Ganapathy, Marwaha, Large, Birchwood and Singh2013; Long et al., Reference Long, Huang, Liang, Liang, Chen, Xie, Jiang and Su2014; Rotenstein et al., Reference Rotenstein, Ramos, Torre, Segal, Peluso, Guille, Sen and Mata2016). The heterogeneity in the current meta-analysis was probably due to the systematic differences between included studies, such as diverse study aims and inclusion/exclusion criteria. Fifth, there may be recall bias in the assessment of SA. Finally, the number of studies that reported data on the current episode and 1-year prevalence was less than those that examined lifetime prevalence that could have influenced the results to an uncertain degree.

In conclusion, the meta-analysis found that the prevalence of SA in BD is higher than the figures reported in schizophrenia and in the general population. Given the major impacts of SA on BD, more mental health resources should be allocated and effective measures should be undertaken to reduce the risk of SA in this population. Identifying the risk factors of SA (e.g. rapid cycling type and female gender as found in this study) and the long-term use of mood stabilisers coupled with psycho-social interventions could reduce the risk of suicidal behaviour (Rihmer, Reference Rihmer2008), e.g. long-term treatment with lithium reduced SA by 10% and completed suicide by 20% (Benard et al., Reference Benard, Vaiva, Masson and Geoffroy2016).

All the data supporting the findings of this meta-analysis have been provided in Tables, Figures and Supplemental Tables and Figures.

The study was supported by the University of Macau (MYRG2015-00230-FHS; MYRG2016-00005-FHS), the National Key Research & Development Program of China (No. 2016YFC1307200), the Beijing Municipal Administration of Hospitals Clinical Medicine Development of Special Funding Support (No.ZYLX201607) and the Beijing Municipal Administration of Hospitals' Ascent Plan (No. DFL20151801).

These authors contributed equally to the work.

Prevalence of suicide attempts in bipolar disorder: a systematic review and meta-analysis of observational studies
×

Prevalence of suicide attempts in bipolar disorder: a systematic review and meta-analysis of observational studies
×

Prevalence of suicide attempts in bipolar disorder: a systematic review and meta-analysis of observational studies
×
×