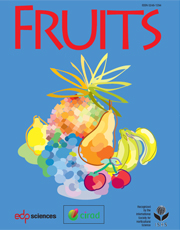 Introduction. Physalis minima is a widespread, quick-growing and high fruit-yielding annual herb belonging to the family Solanaceae. However, like many other underutilized fruit-bearing plants, P. minima is poorly studied and its nutritional potential is unknown. Since the edible sunberry is said to be a rich source of vitamin C, we studied the physiochemical changes during its fruit growth and ripening. Materials and methods. The changes in the physiochemical properties, such as pH, total soluble solids, titrable acidity, chlorophylls, carotenoids, carbohydrates (reducing sugars, non-reducing sugars, total sugars and starch), free amino acids, total proteins, total phenols, ascorbic acid, ethylene, and respiration and the activities of hydrolytic enzymes (amylase and invertase), antioxidant enzymes (catalase and peroxidase), and cell wall-degrading enzymes (cellulase, polygalacturonase and pectinmethylesterase), were analyzed in the fruit of sunberry at five sequential stages, viz., the young, premature, mature, preripe and ripe stages. Results and discussion. A gradual increase in the pH and total soluble solids occurred throughout the growth and ripening of sunberry fruit, while its titrable acidity increased up to the preripe stage and thereafter declined. A decreasing trend in the chlorophylls occurred simultaneously with an increase in the quantity of carotenoids. As the sunberry fruit proceeded towards ripening, the amount of its total starch decreased, with a concomitant sharp increase in the quantity of its reducing sugars, non-reducing sugars and total sugars. An increase in the quantity of free amino acids, proteins and phenols also occurred during the growth and ripening of the fruit, and the quantity of ascorbic acid increased at the mature stage. Moreover, sunberry fruit also exhibits a climacteric behavior with increased ethylene production and rate of respiration. The specific activity of amylase increased throughout the growth period of sunberry, but that of invertase decreased after maturity until ripening. The catalase and peroxidase enzymes showed higher activity, indicating better radical scavenger properties, while cellulase, polygalacturonase and pectinmethylesterase tended to remain at lower levels. Conclusion. The fruit of P. minima are nutritive and a rich source of sugars, starch, free amino acids, proteins, total phenols and ascorbic acid. They are metabolically active, showing a high specific activity of hydrolyzing and antioxidant enzymes, while the activity of cell wall-degrading enzymes is relatively low, indicating a better postharvest storage life.