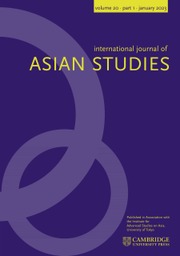 YAMAUBA: REPRESENTATION OF THE JAPANESE MOUNTAIN WITCH IN THE MUROMACHI AND EDO PERIODS

This paper discusses the nature of the yamauba and the transformation of its image over time through an examination of its appearance in literature, folktales and art, focusing on, but not limited to, the early modern period. Literally, “yamauba” means an old woman who lives in the mountains, an appellation indicating a creature living on the periphery of society. Medieval Japanese literature equates the yamauba to a female oni (ogre/demon), sometimes devouring human beings who unwittingly cross her path. She is, however, not entirely negative or harmful. She is also credited with nurturing aspects, though these attributes are not always at the forefront of her character. Indeed, the emphasis on attributes imparted to that character changes significantly over time. A portrayal of the yamauba in the medieval period is predominantly of a witch-like white-haired hag, but by the end of the seventeenth century, the yamauba had come to be considered the mother of Kintarō, a legendary child with Herculean strength. By the eighteenth century, with a help of favorable depictions of the yamauba in puppet and Kabuki plays, she is portrayed by ukiyo-e artists as an alluring, beautiful woman who dotes on her son. The paper concludes that the yamauba remains a familiar figure in present-day Japanese society, and is still identified as a character of the disenfranchised “other.”

YAMAUBA: REPRESENTATION OF THE JAPANESE MOUNTAIN WITCH IN THE MUROMACHI AND EDO PERIODS
×

YAMAUBA: REPRESENTATION OF THE JAPANESE MOUNTAIN WITCH IN THE MUROMACHI AND EDO PERIODS
×

YAMAUBA: REPRESENTATION OF THE JAPANESE MOUNTAIN WITCH IN THE MUROMACHI AND EDO PERIODS
×
×