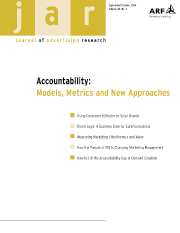 Once again a “paradigm shift” is about to occur, leaving an accepted and acknowledged academic and social frame of standardization, simplification, and specialization totally perplexed. In the field of advertising, the paradigm change is coming from an offspring called Integrated Marketing Communications (IMC). And, nowhere is that more evident than in the non-English-speaking countries where the primary focus on mass advertising and mass communication is giving way to more integrated forms of communication, including such areas as sales promotion, direct marketing, public relations, events, and the like.

During the last decade, a series of studies have been conducted, either on a country level or sometimes among several nation states investigating the development, diffusion, and acceptance of IMC. In many of those studies, the comparison has been in the development and diffusion of the concept among traditional advertising agencies and/or advertiser companies. Thus, the most recent research on IMC has been mainly focused on its perception by clients and their advertising agencies (1991 and 1993 in United States; 1995 in the United Kingdom; 1998 in New Zealand, United Kingdom, United States, Australia, and India; 1999 to the present in many research studies). In some of those studies, scholars have argued that IMC is nothing new, it is simply a reiteration of what marketing and communication organizations have always done. In others, research has shown that IMC is indeed a new paradigm and can be quite successfully deployed by all types of firms in the new millennium.