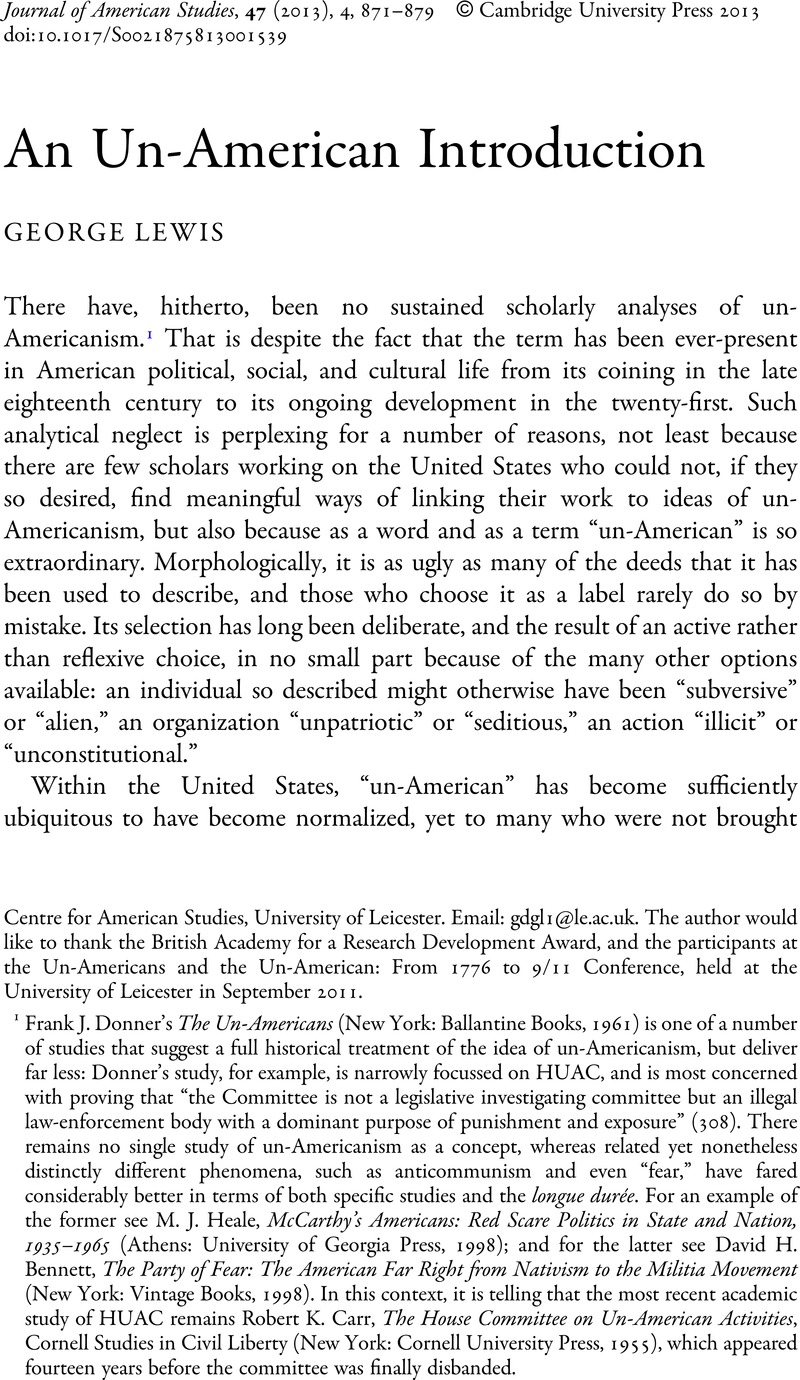 1 Donner's, Frank J.The Un-Americans (New York: Ballantine Books, 1961)Google Scholar is one of a number of studies that suggest a full historical treatment of the idea of un-Americanism, but deliver far less: Donner's study, for example, is narrowly focussed on HUAC, and is most concerned with proving that “the Committee is not a legislative investigating committee but an illegal law-enforcement body with a dominant purpose of punishment and exposure” (308). There remains no single study of un-Americanism as a concept, whereas related yet nonetheless distinctly different phenomena, such as anticommunism and even “fear,” have fared considerably better in terms of both specific studies and the longue durée. For an example of the former see Heale, M. J., McCarthy's Americans: Red Scare Politics in State and Nation, 1935–1965 (Athens: University of Georgia Press, 1998)CrossRefGoogle Scholar; and for the latter see Bennett, David H., The Party of Fear: The American Far Right from Nativism to the Militia Movement (New York: Vintage Books, 1998)Google Scholar. In this context, it is telling that the most recent academic study of HUAC remains Carr, Robert K., The House Committee on Un-American Activities, Cornell Studies in Civil Liberty (New York: Cornell University Press, 1955)Google Scholar, which appeared fourteen years before the committee was finally disbanded.

2 Transcripts of Hansen's maiden speech to the Australian parliament are still a mainstay of right-wing websites, for example www.ourcivilisation.com/decline/example/hansonp.htm. The term's meaning has broadened as it has entered the lexicon, and now refers more loosely to inconsiderate behaviour. See, for example, “Australia's Undoing,” Sydney Morning Herald, 15 March 2005; and Hugh Mackay, “Just Who Is Un-Australian?”, The Age, 20 June 2005, accessed at www.theage.com.au/news/hugh-mackay/just-who-is-unaustralian/2005/06/19/1119119722702.html. For undeutsche see Rash, Felicity J., The Language of Violence: Adolf Hitler's Mein Kampf (New York: Peter Lang, 2006) 178Google Scholar.

5 See, for example, the reference to “un-American feelings and sentiments” in a letter from “A Farmer” to “Mr Rhoades,” 25 July 1799, Independent Chronicle, Boston, MA. It is an indication of the lack of historical treatment that the term has received that the OED reports the initial coining of the term taking place in 1818.

8 Former vice president Al Gore made his comments on the surveillance that had been carried out under the aegis of the Foreign Intelligence Surveillance Act, which had itself been amended by the Bush Administration's Patriot Act of 2001, via his twitter feed at https://twitter.com/algore/status/342455655057211393. Republican Senator Jim Sensenbrenner, who was one of the authors of the Patriot Act, referred to the un-American nature of the surveillance. See www.guardian.co.uk/world/2013/jun/06/obama-administration-nsa-verizon-records.