The Anglo-Scottish Treaty of Union, 1707 in 2007: Defending the Revolution, Defeating the Jacobites 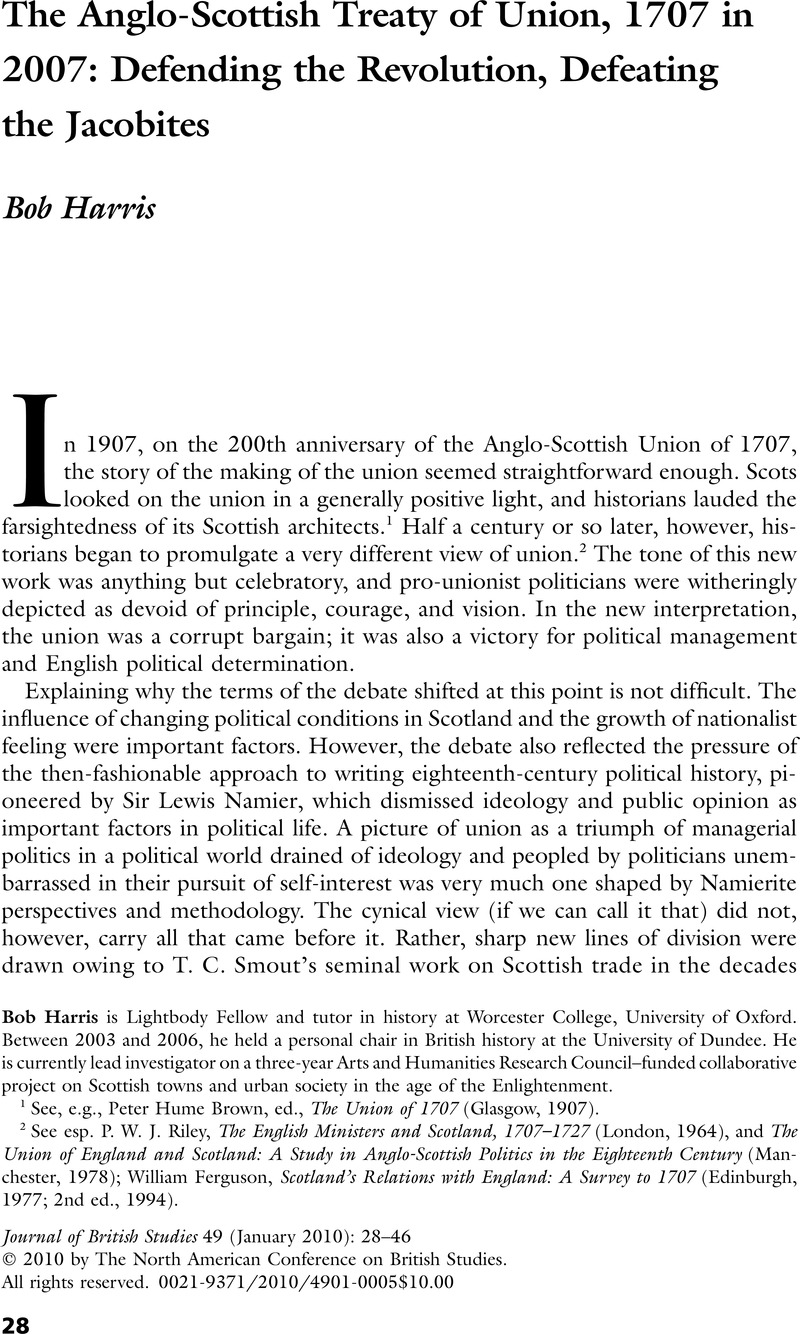 5 See the essays in Robertson, John, ed., A Union for Empire: Political Theory and the Union of 1707 (Cambridge, 1995); Armitage, David, The Ideological Origins of the British Empire (Cambridge, 2000).

8 Macinnes, Allan I., “Influencing the Vote: The Scottish Estates and the Treaty of Union, 1706–07,” History Microcomputer Review 2 (1990): 11–25. See also the discussion of the payments from the equivalent fund in Shaw, John Stuart, The Political History of Eighteenth-Century Scotland (Basingstoke, 1999), 1–17.

9 Two recent books on the union restate their authors' earlier published views, largely and in condensed form in one case and with little original research and no new perspectives in the other. They are, respectively, Scott, Paul Henderson, The Union of 1707: Why and How? (Edinburgh, 2006); and Fry, Michael, The Union: England, Scotland and the Treaty of Union (Edinburgh, 2006). Fry's is essentially a narrative account, a very readable one, that appears to draw heavily on the work of Riley and Ferguson.

14 Whatley, Christopher and Patrick, Derek J., “Contesting Interpretations of the Union of 1707: The Abuse and Use of George Lockhart of Carnwath's Memoirs,” Journal of Scottish Historical Studies 27, no. 1 (July 2007): 24–47.

19 On this theme, see esp. Armitage, David, “The Scottish Vision of Empire: Intellectual Origins of the Darien Venture,” in Robertson, Union for Empire, 97–188, and Ideological Origins, chap. 6.

25 Pocock, J. G. A., “Empire, State and Confederation: The War of American Independence as a Crisis in Multiple Monarchy,” in his The Discovery of Islands: Essays in British History (Cambridge, 2005), 134–63.

37 Whatley and Patrick, “Contesting Interpretations,” 35. Whatley and Patrick also cite the Jacobite James Carnegy to the effect that only if James VIII were to disavow his Catholicism as well as declare himself against the union would such an alliance be even conceivable.

38 Stephen, Presbyterians and the Act of Union, 31.

The Anglo-Scottish Treaty of Union, 1707 in 2007: Defending the Revolution, Defeating the Jacobites