Can Women Be Missionaries? Envisioning Female Agency in the Early Nineteenth-Century British Empire 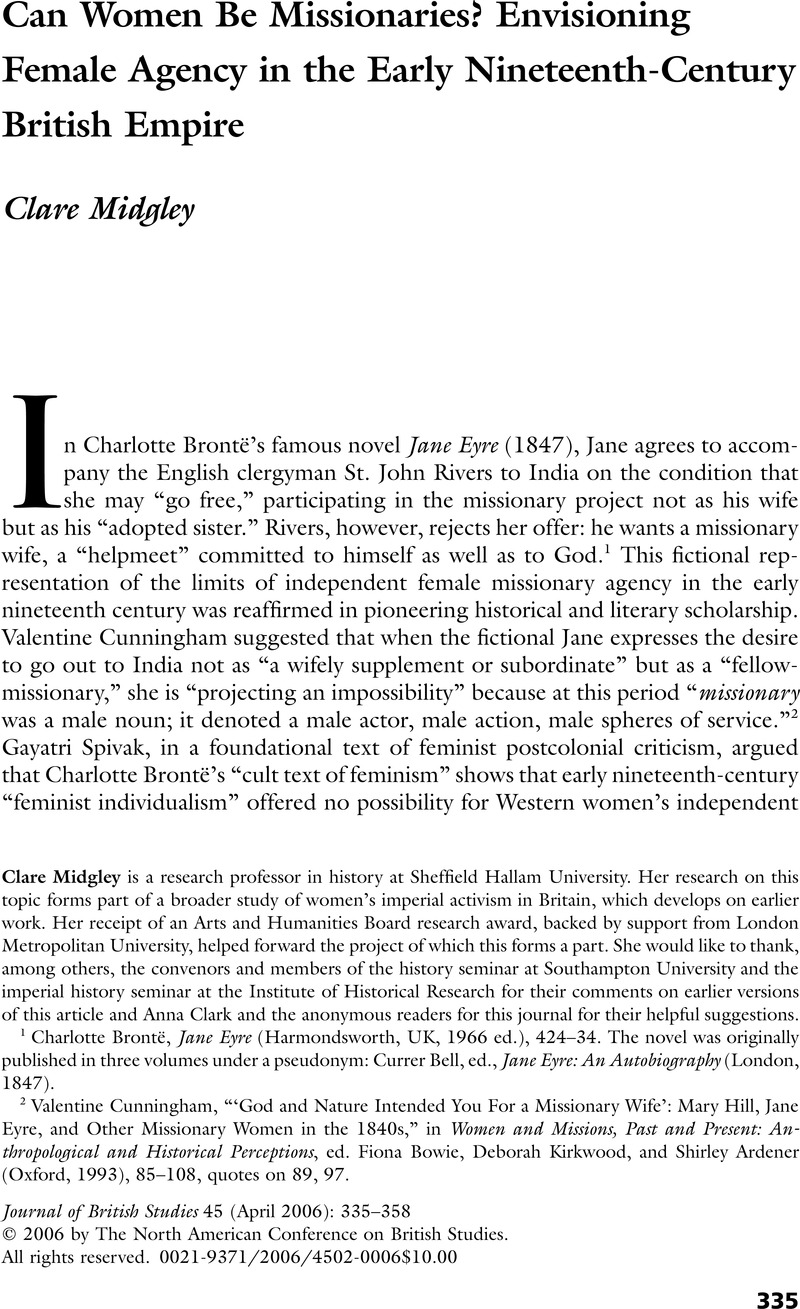 2 Cunningham, Valentine, “‘God and Nature Intended You For a Missionary Wife’: Mary Hill, Jane Eyre, and Other Missionary Women in the 1840s,” in Women and Missions, Past and Present: Anthropological and Historical Perceptions, ed. Bowie, Fiona, Kirkwood, Deborah, and Ardener, Shirley (Oxford, 1993), 85–108, quotes on 89, 97.

19 Noel (1799–1873) was a clergyman in the Church of England until 1848, when he became a Baptist minister. He was an influential reformist Whig who opposed the Corn Laws and led pan-evangelical initiatives to evangelize the urban poor. See Carter, Grayson's entry on Noel in the Oxford Dictionary of National Biography (Oxford, 2004).

21 This breakaway group was called the Female Society of the Free Church of Scotland for Promoting Christian Education of the Females in India. Swan, Annie S., Seed Time and Harvest: The Story of the Hundred Years’ Work of the Women's Foreign Mission of the Church of Scotland (London, 1937); Eighth Annual Report of the Scottish Ladies’ Association for the Advancement of Female Education in India, under the Superintendence of the General Assembly's Committee on Foreign Missions (Edinburgh, 1846); Rev.Duff, Alexander, More Fruits from India (Edinburgh, ca. 1848); The Eastern Females’ Friend, n.s., 3 (July 1857): 34.

31 Rev.Fairchild, A. G., comp., Memoir of Mrs. Louisa A. Lowrie, of the Northern India Mission: With Introductory Notices by the Reverend E. P. Swift, the Reverend W. H. Pearce, and the Reverend A. Reed, DD. Reprinted from the Second American Edition (London, 1838), 1, 4–5.

34 Extracts from the Journal and Correspondence of the Late Mrs. M. M. Clough, Wife of the Reverend Benjamin Clough, Missionary in Ceylon (London, 1829), xxxv, 37.

36 Ellis, William, Memoir of Mary M. Ellis, Wife of the Reverend William Ellis, Missionary to the South Seas, and Foreign Secretary of the London Missionary Society (London, 1835), lv, vi, 12. Ellis's second wife was Sarah Stickney Ellis, a highly successful author whose literary career he supported. She was the author of best-selling prescriptive tracts for women that combined an acceptance of women's social subordination with a stress on their moral authority in the domestic sphere.

39 Memoirs of Female Labourers in the Missionary Cause (Bath, 1839), 25–26. Catherine Hall discusses a rather similar account relating to a woman who married a missionary to Jamaica—see Hall, “Missionary Stories,” 223.

43 The third was Miss Smith, one of the early agents of the FES in Bombay, and to her biographical entry Thompson appended some general information on the society, together with a list of the single women it had sent out to India and elsewhere.

51 Pitman, Emma Raymond, Heroines of the Mission Field: Biographical Sketches of Female Missionaries Who Have Laboured in Various Lands among the Heathen (London, 1880).

54 Amanda Vickery has suggested that such prescriptive tracts can be read not as evidence of the constriction of women's lives but as a defensive reaction against women's public activities: Vickery, Amanda, “From Golden Age to Separate Spheres? A Review of the Categories and Chronology of English Women's History,” Historical Journal 36, no. 2 (1993): 383–414.

57 Cox, Francis Augustus, prefatory essay to Female Scripture Biography: Including an Essay on What Christianity Has Done for Women, 2 vols. (London, 1817), xxiv, xcvi.

58 James, John Angell, Female Piety; or, The Young Woman's Friend and Guide through Life to Immortality (London, 1852). This consisted of ten sermons, the first of which was entitled “The Influence of Christianity on the Condition of Women.” This work had entered its 10th ed. by 1864. A note on p. 6 acknowledges its indebtedness to Cox's essay.

61 “Appeal.” The text of this appeal was also published as app. B to the History of the Society for Promoting Female Education, where its author is named as the Reverend Baptist W. Noel (see 266–75).

66 Report of the Glasgow Association for Promoting Female Education in the East (Glasgow, 1840), 7.

72 See the entry on Tonna by Lenard, Mary in the Oxford Dictionary of National Biography (Oxford, 2004).

80 The English Woman's Journal, the earliest English feminist journal linked to the Langham Place Circle, which began publication in 1858, makes no reference to the work of British Protestant missionary women (although it does include information on Christian educational work by a Catholic woman in the French colony of Algeria).

Can Women Be Missionaries? Envisioning Female Agency in the Early Nineteenth-Century British Empire