Women, Pets, and Imperialism: The British Pekingese Dog and Nostalgia for Old China 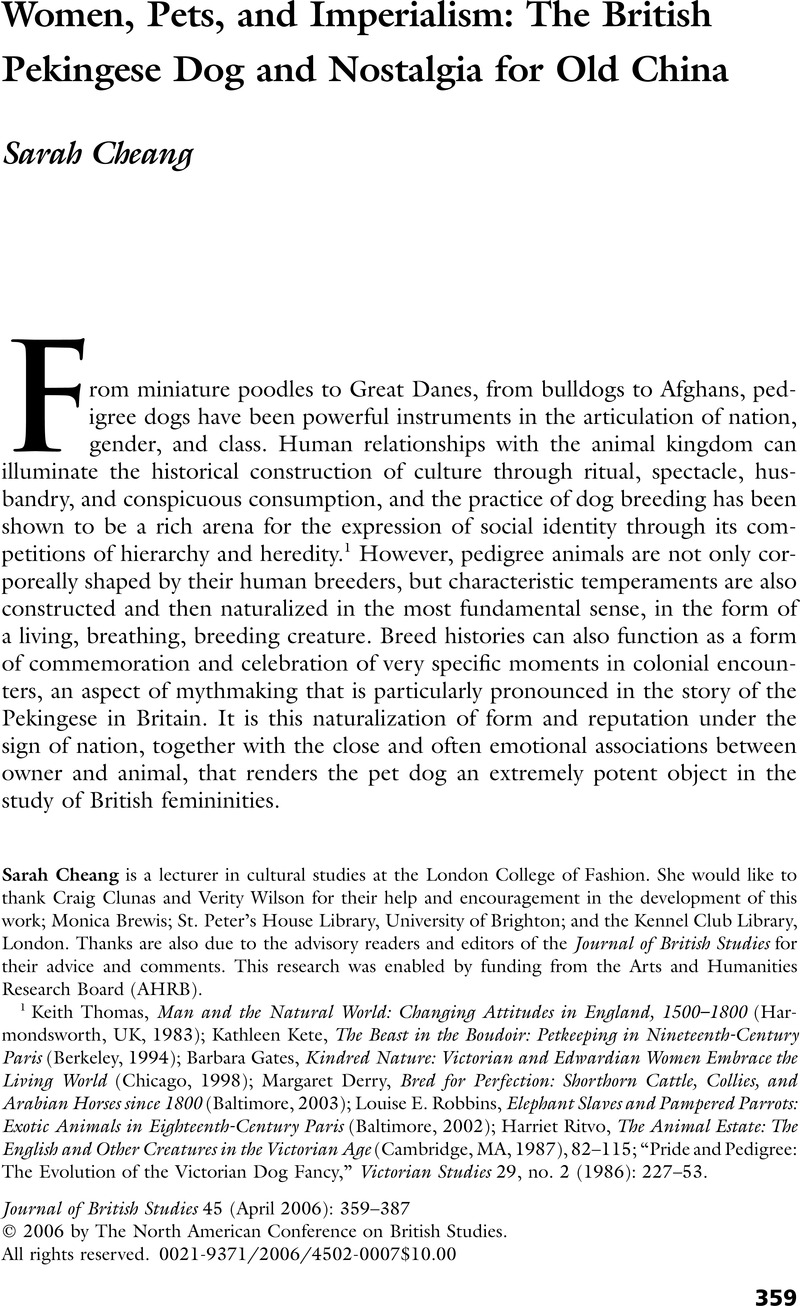 6 Hevia, James L., “Loot's Fate: The Economy of Plunder and the Moral Life of Objects ‘From the Summer Palace of the Emperor of China,’” History and Anthropology 6, no. 4 (1994): 319–45. In more recent work, Hevia has discussed how the Western humiliation of the Chinese during and after the Boxer Uprising used talismanic Chinese Imperial spaces such as the Forbidden City on the understanding that the Forbidden City was a quasi-sacred and therefore highly significant place. Western entry into Chinese palaces was made with great “historical consciousness” (Hevia, English Lessons, 203–8). See also Clunas, Craig, “Oriental Antiquities/Far Eastern Art,” in Formations of Colonial Modernity in East Asia, ed. Barlow, Tani E. (Durham, NC, 1997), 428–31.

11 Stewart, On Longing, 136–37. In Susan Stewart's description of the souvenir in Western capitalist society as an “authentic object” related to an “authentic experience,” she places this experience “beyond the horizon of present lived experience, the beyond in which the antique, the pastoral, the exotic, and other fictive domains are articulated,” which is a fitting description of Old China.

23 Verity-Steele and Ash assert that Mrs. Loftus Allen traveled with her husband. The Howes write that she stayed at home in Birkenhead. Verity-Steele, Book on Pekingese, 21; Ash, Pekingese as a Companion, 18–19, 21, 23; Howe and Howe, Pekingese Scrapbook, 49–52.

37 Interest in pekes may have initially been concentrated in the south of England. At annual Manchester shows between 1901 and 1904, no Pekingese were shown, whereas twelve were shown at Croydon in 1904. Ash, Pekingese as a Companion, 19–20.

43 Ladies’ Field was published between 1898 and 1928 and was then incorporated into Home Magazine. A George Newnes product (whose other contemporary publications included Country Life and World-Wide Magazine), Ladies’ Field cost sixpence a week, had an international circulation, and was available at W. H. Smith's bookstalls or could be ordered from newsagents. Kate Jackson suggests that Ladies’ Field had a weekly circulation in the hundreds of thousands, whereas other ladies’ papers achieved only seventeen to twenty-seven thousand. Jackson, Kate, George Newnes and the New Journalism in Britain, 1880–1910: Culture and Profit (Aldershot, UK, 2001), 209–36.

50 For a glimpse into the strained relationship between the Kennel Club and the Ladies’ Kennel Association, see the account of Kennel Club committee meetings in Jacquet, Edward William, The Kennel Club: A History and Record of its Work, with Numerous Portraits and Other Illustrations by Edward William Jacquet Secretary of the Kennel Club, Fellow of the Chartered Institute of Secretaries (London, 1905), 207–8, 216–17, 229–30, 239–41, 243–44, 330, 391.

56 The writing attributed to Cixi was often published under the title “Pearls Dropped from the Lips of Her Imperial Majesty Tzu Hsi, Dowager Empress of the Flowery Land” and was referred to as “The Pearls.” It seems that “The Pearls” was in the possession of the first Pekingese Club and was published as a pamphlet by Mrs. Ashton Cross. Smythe then included it in her 1909 edition of Pekingese. See Howe and Howe, Pekingese Scrapbook, 35–37. The stereotypes of Chineseness employed in “The Pearls” correspond with influential and authoritative late nineteenth-century guides to the Chinese character, such as Smith, Arthur H.'s Chinese Characteristics (2nd rev. ed. [London, 1895]), and have much in common with the pseudo-Chinese popular fiction that was produced in Europe and America during the early twentieth century. Druce, Robert, “The ‘Heathen Chinee’ and the ‘Yellow Peril’: Pseudo-Chinoiserie in Popular Fiction,” in Oriental Prospects: Western Literature and the Lure of the East, ed. Barfoot, C. C. and D’haen, Theo (Amsterdam, 1998), 131–59.

61 In connection with this point, there are some interesting comparisons to be made with the American Pekingese clubs, given the problematic nature of “queenhood,” in American modern femininity and national identity discussed in Boisseau, T. J., “White Queens at the Chicago World's Fair: New Womanhood in the Service of Class, Race, and Nation,” Gender and History 12, no. 1 (2000): 33–81.

65 The gravestones of Mrs. Greville's pekes, and other pekes belonging to the family, can be seen in a little dog graveyard at Polesden Lacey, Surrey. On Mrs. Greville, see Rowell, Christopher, Polesden Lacey: Surrey (London, 1999).

69 Comparison of contemporary Chinese garments and the cape illustrated in Liberty's catalog clearly shows that the cape that Liberty's claimed to be made from “Mandarin robes” was in fact a Chinese woman's skirt that had been altered to create a cape by simply gathering in the waist and adding a collar. See the illustration in Liberty and Co., Liberty Yule-Tide Gifts (London, 1898), 56.

79 Wang Yun's pronouncements on the Pekingese had already been referred to in print by Mrs. Archibald Little, who lived in China and was clearly very familiar with the Pekingese dog and its supporters. Mrs.Little, Archibald, Round about my Peking Garden (second impression, London, 1905), 81–89.

85 The word “amah,” meaning Chinese maid-servant or Chinese nurse, contains an ambivalence that presents Shen as a maid, a kennel maid, and a nurse, thus collapsing the boundaries between human and animal, and pet and child.

91 The work of Homi K. Bhabha, Franz Fanon, and Gayatri Chakravorty Spivak has identified “the jagged testimony of colonial dislocation,” which renders single approaches to colonial oppression and identity unsatisfactory and demands a fuller attention to all social texts, such as acts of rebellion, marked absences of representation, and surely also the manipulation of material culture; Bhabha, Homi K., The Locations of Culture (London, 1994), 41; Fanon, Franz, Black Skin, White Masks (London, 1996); Spivak, Gayatri Chakravorty, “Can the Subaltern Speak?” in Marxism and the Interpretation of Culture, ed. Nelson, Cary and Grossberg, Lawrence (London, 1988), 271–311; Spivak, Gayatri Chakravorty, “The Rani of Simur: An Essay in Reading the Archives,” History and Theory 24 (1985): 247–72.

93 As studies of dress have shown, the choice of Chinese clothing over a Western business suit was deeply loaded, a performance of gender, class, and national identity in which compliance with dress codes involved a crucial negotiation of power and also the “positive orientalism” of many anticolonial movements. Steele, Valerie and Major, John S., China Chic: East Meets West (New Haven, CT, 1999), 23; Fox, Richard, “East of Said,” in Edward Said: A Critical Reader, ed. Sprinkler, Michael (Oxford, 1992).

94 Stoler, Ann Laura, Race and the Education of Desire: Foucault's History of Sexuality and the Colonial Order of Things (Durham, NC, 1995).

100 Mrs.Lytton, Neville, Toy Dogs and Their Ancestors: Including the History and Management of Toy Spaniels, Pekinese, Japanese, and Pomeranians (London, 1911), 253. See also 246–49.

105 Li Ching-fong (shown in text as Qingfong), “His Excellency the Chinese Minister Lord Li Ching-fong, on Chinese Dogs,” in Smythe, Pekingese, 4th ed., 7. Li Qingfong was a son of Li Hongzhang and was an ambassador in London in 1908. Our Dogs reported that he visited the 1909 PPDA show and said he owned thirty pekes in China. See Howe and Howe, Pekingese Scrapbook, 33–34.

118 Stoler, Carnal Knowledge, 19; Burton, Antoinette, “Who Needs the Nation? Interrogating ‘British’ History,” in Culture of Empire: Colonizers in Britain and the Empire in the Nineteenth and Twentieth Centuries, a Reader, ed. Hall, Catherine (Manchester, 2000), 140–41.

Women, Pets, and Imperialism: The British Pekingese Dog and Nostalgia for Old China