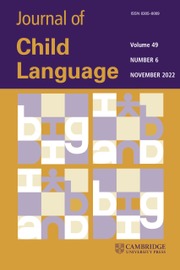 Filling lexical gaps and more: code-switching for the power of expression by young bilinguals

In this preregistered, longitudinal study of early code-switching, 34 US-born, Spanish–English bilingual children were recorded with a bilingual family member at 2;6 and 3;6, in Spanish-designated and English-designated interactions. Children’s Spanish and English expressive vocabulary and their exposure to code-switching were measured through direct assessment and caregiver report. The children code-switched most frequently at speaker changes; within-turn and within-utterance codeswitching were rare. By 3;6, switches to English were significantly more frequent than switches to Spanish. At both ages, Spanish proficiency was a negative predictor of the frequency of switching to English, but children’s degree of English dominance uniquely explained additional variance. Thus, children appear to code-switch not merely to fill gaps in their weaker language but to maximize their expressive power. Neither individual differences in exposure to code-switching nor in the interlocutors’ language proficiency were consistently related to the children’s rate of code-switching.

Filling lexical gaps and more: code-switching for the power of expression by young bilinguals
×

Filling lexical gaps and more: code-switching for the power of expression by young bilinguals
×

Filling lexical gaps and more: code-switching for the power of expression by young bilinguals
×
×