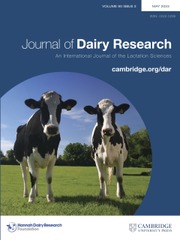 How does changing the feeding bin affect cows’ behaviour?

In a system in which cows are grouped and given differential access to feeding bins with different rations, and where these groups change over time, it is important to find out how a change in the ration (and hence feeding bin) affects the cow's feeding behaviour. Monitoring the locomotion of cows can be used to predict oestrus and improve health (lameness diagnosis), but activity monitors can also be used to estimate both activity and numbers of feeding visits by cows. Ice tag activity monitors were attached to the right hind legs of ten cows. Walking, standing, lying data and health records were used to record changes before and after a change in each cow's feeding bin. Results comparing activity before and after feeding bin change revealed significant increases in motion index, number of steps taken per minute and number of lying bouts per minute (all P < 0.001). Comparing the behaviours of cows subsequently followed during the dry period showed significant differences in motion indices and number of steps taken per minute (P < 0.001) in the dry period. The results indicate that cows are affected by feeding bin change and group change, which can lead to an increase in behaviour associated with the stress response, especially in heifers.

How does changing the feeding bin affect cows’ behaviour?
×

How does changing the feeding bin affect cows’ behaviour?
×

How does changing the feeding bin affect cows’ behaviour?
×
×