The Journal of Glaciology

In July Last I was crossing Hrútárjökull when I noticed some scattered moss-covered stones some 7 to 10 cm. in diameter lying on the ice among other small, ordinary debris. This was about 1000 m. up from the snout of the glacier. The ice was otherwise quite free of sand or dust and sloped gently towards south-east. Some of the stones turned out to be completely covered with moss, but in most cases a corner of the stone kernel protruded through the moss cover, mostly at the point of contact with the ice, see Fig. 1, p. 502. 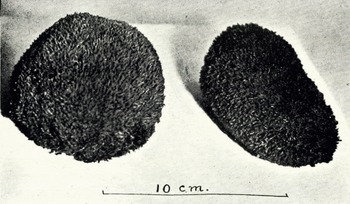 The distance from this part of the glacier to the nunatak Ærfjall is about 3 km. Hrútárjökull reaches the low land in front of it, the snout ending at about 100 m. above sea-level.

Probably these stones are partly overgrown with moss when they are carried from the nunatak by the glacier. The curiously rounded shape may be due in part to a rolling motion as they are brought along by the melting ice and in part to the light and air let in through the porous surface of the glacier —sufficient to permit the continued growth of the moss in contact with the ice.

On 20 October I went for a short trip to Breidamerkurjökull and walked some 4 km. along the medial moraine which originates at the nunatak Mávabyggdir. Up on the moraine, 3 to 4 km. from the snout, I found some of these moss-covered stones but they were only few and scattered. So I think they may be formed on the medial moraines of slow-moving glaciers. Some of them had rolled from the moraine ridge and were lying on the glacier nearby.

I have nowhere and never seen this kind of vegetation before, and only a few local people had noticed it at Hrútárjökull and its neighbouring glacier, Kvíárjökull.

I call these mossy balls Jökla-mýs, literally “glacier mice,” and you will have noted, Sir, that rolling stones can gather moss.