“Everything has a price”: Jimmy Carter and the Struggle for Balance in Federal Regulatory Policy 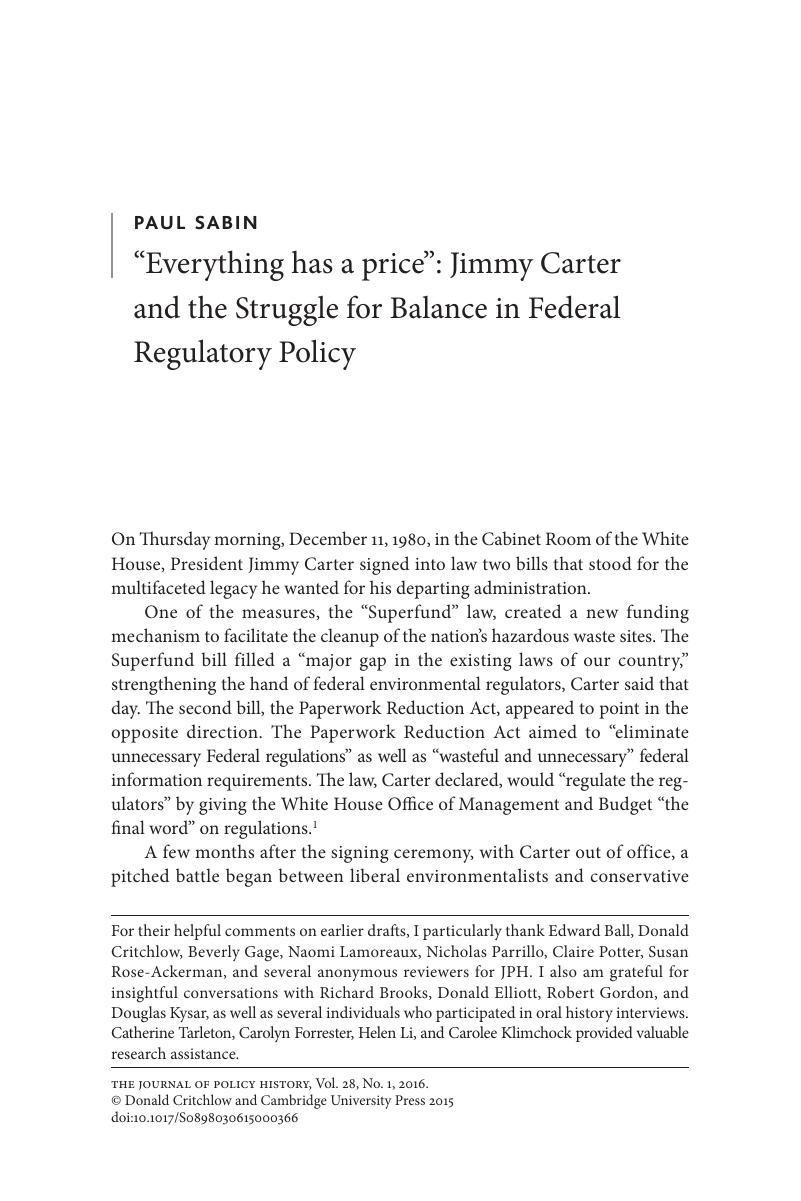 5. Whether regulatory costs significantly impeded economic growth in the 1970s or worsened that decade’s high inflation is a question that goes beyond the scope of this article. Some economists and historians are deeply skeptical that regulations have imposed costs sufficient to cause industrial relocation or to weaken industrial competitiveness. Others contend that regulatory costs meaningfully slowed economic growth, perhaps half a percent or a percent each year. For a skeptical assessment of regulation’s impact on industrial relocation, see Bruce G. Carruthers and Naomi R. Lamoreaux, “Regulatory Races: The Effects of Jurisdictional Competition on Regulatory Standards,” unpublished essay, 11 June 2013, copy in the possession of the author; for an assessment of the effects of clean-air regulation on manufacturing competitiveness, see Michael Greenstone, John A. List, and Chad Syverson, “The Effects of Environmental Regulation on the Competitiveness of U.S. Manufacturing” (10 September 2012), MIT Department of Economics Working Paper No. 12–24; Greenstone, Michael, “The Impacts of Environmental Regulations on Industrial Activity: Evidence from the 1970 and 1977 Clean Air Act Amendments and the Census of Manufactures,” Journal of Political Economy 110, no. 6 (December 2002): 1175–1219.CrossRefGoogle Scholar This article also does not address the voluminous legal scholarship on the normative value of cost-benefit analysis and enhanced presidential authority over regulation. For selections from this scholarly debate, see Kagan, Elena, “Presidential Administration,” Harvard Law Review 114 (2000–2001): 2245–2385;CrossRefGoogle Scholar Cass R. Sunstein, Risk and Reason: Safety, Law, and the Environment (New York, 2002); Sunstein, “Cost‐Benefit Analysis and the Environment,” Ethics 115, no. 2 (1 January 2005): 351–85; Douglas A. Kysar, Regulating from Nowhere: Environmental Law and the Search for Objectivity (New Haven, 2010); Frank Ackerman and Lisa Heinzerling, Priceless: On Knowing the Price of Everything and the Value of Nothing (New York, 2004); Richard L. Revesz and Michael A. Livermore, Retaking Rationality: How Cost-Benefit Analysis Can Better Protect the Environment and Our Health (New York, 2008). Jonathan Wiener also has written widely on the origins and spread of regulatory oversight. See, for example, Jonathan Wiener, B., “The Diffusion of Regulatory Oversight,” in The Globalization of Cost-Benefit Analysis in Environmental Policy, ed. Livermore, Michael A. and Revesz, Richard L. (New York, 2013): 123–41;CrossRefGoogle Scholar Wiener, Jonathan B. and Alemanno, Alberto, “Comparing Regulatory Oversight Bodies across the Atlantic: The US Office of Information and Regulatory Affairs (OIRA) and the EU Impact Assessment Board (IAB),” in Comparative Administrative Law, ed. Rose-Ackerman, Susan and Lindseth, Peter (Northampton, Mass., 2010), 309–35.Google Scholar

13. Joe Green Conley shows how businesses reacted quickly in the early 1970s to emphasize the burden of environmental regulation, uncertainty of science, and need to balance costs and benefits. See Conley, “Environmentalism Contained”; for a forceful contemporary attack on business’s use of cost-benefit analysis to undermine federal regulation, see Green, Mark J. and Waitzman, Norman, Business War on the Law: An Analysis of the Benefits of Federal Health/safety Enforcement, rev. 2nd ed. (Washington, D.C., 1981).Google Scholar

50. George C. Eads, “Testimony Before the Committee on Oversight and Governmental Management,” 10 October 1979, JC-CEA, Charles L. Schultze Briefing Book Files, Box 130: [2]; “Briefing Book- Regulatory Reform, 11/79 [2],” JC-CEA, Charles L. Schultze Briefing Book Files, Box 130: [2]. In an illustration of the process strategy at work, the secretary of labor wrote to the departments’ executive staff in January 1979 to outline new regulatory procedures that would help ensure that “all regulations published by the Department are of high quality and can be defended.” The new procedures stipulated a written development plan for each regulation, including a clear statement of need, regulatory alternatives, and significance, and noting whether a full regulatory analysis was required. Secretary of Labor to Executive Staff, “Regulatory Procedures within the Department,” 30 January 1979, JC-CEA, Charles L. Schultze’s Subject Files, Box 73:1; Si Lazarus to Chuck Knapp, DOL Regulatory Procedures,” 13 February 1979, JC-CEA, Charles L. Schultze’s Subject Files, Box 73:1. For a discussion of the ways that agencies could use the internalization of regulatory analysis to protect themselves from external review, see Nou, Jennifer, “Agency Self-Insulation Under Presidential Review,” Harvard Law Review 126 (May 2013): 1755–1837.Google Scholar

63. For more on Carter’s effort to balance these competing ideas, see his 1979 State of the Union speech, as discussed in J. Brooks Flippen, Jimmy Carter, the Politics of Family, and the Rise of the Religious Right (Athens, Ga., 2011), 208. For the legal activity spurred by Superfund, see Lawrence Hurley, “Lawyers Still Cleaning Up over Superfund Sites,” New York Times, 3 January 2011; Revesz and Stewart, eds., Analyzing Superfund, 8–10.

67. Ronald Reagan, Memorandum to Cabinet, 29 January 1981, online at http://www.thecre.com/pdf/ReaganMemo.PDF; Executive Order 12291, 17 February 1981, 46 FR 13193, 3 CFR, 1981 Comp., 127. James Miller, who headed the Office of Information and Regulatory Affairs during Reagan’s first year in office and then led OMB during Reagan’s second term, recalled in a 2001 interview that he and C. Boyden Gray pushed Executive Order 12291 through very quickly in the administration’s first weeks, taking the regulatory agencies “completely by surprise,” before their political appointees were fully established. The executive order was presented to agency general counsels as a finalized document already signed by the president. Miller Center, “Interview with James Miller: November 4, 2001,” Charlottesville, University of Virginia, 2005, 21.

“Everything has a price”: Jimmy Carter and the Struggle for Balance in Federal Regulatory Policy
×

“Everything has a price”: Jimmy Carter and the Struggle for Balance in Federal Regulatory Policy
×

“Everything has a price”: Jimmy Carter and the Struggle for Balance in Federal Regulatory Policy
×
×