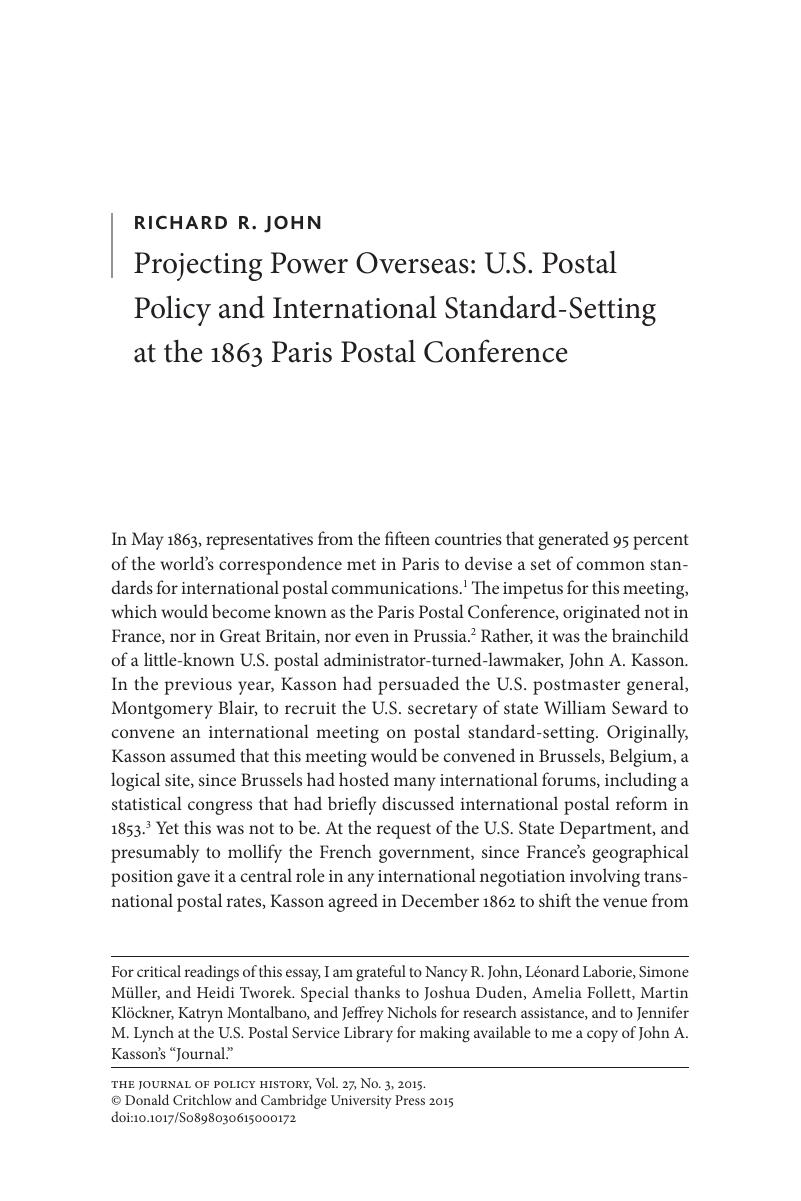 2. Confusion persists even with respect to nomenclature. The U.S. delegate, John A. Kasson, consistently termed the meeting a “conference,” a practice followed here. In the U.S. press, however, the meeting was often termed a “convention”; in France and England, in contrast, it was sometimes termed a “commission” or a “congress.” The term “convention” linked the meeting with social reform; “commission” and “congress” with diplomacy. For “Postal Convention,” see “The Postal Puzzle,” Philadelphia Inquirer, 5 December 1862; “Postal Convention,” Baltimore Sun, 10 July 1863; “The International Postal Convention,” Springfield Republican, 29 August 1863. For “commission,” see Commission Internationale des Postes (Paris: Impériale, 1863); “Letter from Paris,” 23 June 1863, in Milwaukee Sentinel, 11 July 1863; “The International Postal Congress,” Manchester Guardian, 6 June 1863.

7. The most authoritative English-language account of the conference remains Codding, George A. Jr., The International Postal Union: Coordinator of International Mails (New York, 1964), 20–24, which can be supplemented by Léonard Laborie, L’Europe mise en réseaux: La France et la coopération internationale dans les postes et les télécommunications (Brussels, 2010), chap. 2. Other accounts include Marc Moser, 100 Jahre Weltpostverein (Frankfurt am Main, 1974–75); Younger, John A. Kasson, chap. 9; Sly, John F., “The Genesis of the Universal Postal Union: A Study of the Beginnings of International Organization,” International Conciliation 233 (October 1927): 395–436; and Beelenkamp, C. J., Les lois postales universelles (Havre, 1910), 531–50. Moser, Younger, and Beelenkamp had access to a copy of the official proceedings of the conference; Sly did not (Sly, “Genesis,” 424 fn 20). No previous scholar has had access to Kasson’s personal journal, which has long been retained among the miscellaneous records of the U.S. Postal Service Library in Washington, D.C. The librarian of the U.S. Post Office Department briefly contemplated publishing Kasson’s journal in conjunction with the centennial of the Paris Postal Conference in 1963. The librarian demurred, however, after he read through the document, fearful that, though a century had passed, Kasson’s “pithy and sagacious comments” about the other delegates—Kasson had much, in particular, to say about the French and the British—might “possibly strain international relations.” Xenophon P. Smith, memorandum, 24 August 1962, USPSL-DC.

8. The conference goes unmentioned, for example, in Herring’s, George C. From Colony to Superpower: U.S. Foreign Relations since 1776 (New York, 2008).

13. John, Richard R., “The Political Economy of Postal Reform in the Victorian Age,” Smithsonian Contributions to History and Technology 55 (2010): 3–12.

15. John, Richard R., “Expanding the Realm of Communications,” in An Extensive Republic: Print, Culture, and Society in the New Nation: vol. 2 of A History of the Book in America, ed. Gross, Robert A. and Kelley, Mary (Cambridge, 2010), 211–20; John, Spreading the News: The American Postal System from Franklin to Morse (Cambridge, Mass., 1995), chap. 2. The extension of the civic rationale for postal policy to embrace the circulation of parcels was highly controversial and, when this issue first found its way onto the public agenda in the 1870s, met with vigorous opposition. “If Congress proposes to go into the business of transporting dry goods, groceries, and harnesses in four-pound packages,” declared an editorialist in 1876 who was otherwise sympathetic to low-cost mail delivery, “it should, at the very least, charge enough to pay the expenses. We doubt the expediency of going into the [parcel delivery] business at all. . . . The cheapest rate of postage can be attained best by confining the mail to its proper business.” “The Postal Question,” Independent, 20 April 1876.

21. George Bancroft to Lord Clanicarde, 11 February 1848, in Polk, James K., “Message from the President, Communicating the Correspondence between the United States Minister at London and Authorities of the British Government, In Relation to a Postal Arrangement between the Two Countries,” Sen. Ex. Doc. 30, 30th Cong., 1st sess., 1848 (serial 506), 35.

41. Among the American merchants active in overseas trade with whom Kasson met with in London and Paris in the days immediately preceding the 1863 conference were John Murray Forbes and William H. Aspinwall. Kasson, “Journal,” 9, 12 May 1863, USPSL-DC; Worthington Chauncey Ford, ed., A Cycle of Adams Letters, 1861–1865 (Boston, 1920), 400.

47. Kasson, “Journal,” 26 May 1863, USPSL-DC. Kasson was by no means alone in prioritizing low cost over high speed. “Cheap postage is a blessing more especially to the poor and the emigrant,” editorialized the New-York Tribune in discussing a postal treaty with Great Britain: “To them a difference of forty-eight hours in time is nothing, but a difference of nine cents in money is a great deal. The proportion of business letters which require speed in transmission, we are credibly informed, is to other letters not more than as one to nine.” “The British Postal Treaty,” New-York Tribune, 20 February 1868.

52. Lewins, William, Her Majesty’s Mails: An Historical and Descriptive Account of the British Post-Office (London, 1863), 183.

55. “Thorough Postal Reform,” Independent, 13 February 1862. Most Independent editorials, like this one, were unsigned. Leavitt’s authorship can be inferred from its vigorous style, the self-assurance with which it tackled arcane postal topics, and its allusion to the newly appointed Boston postmaster, John Gorham Palfrey, a longtime acquaintance. Leavitt served as managing editor of the Independent from its founding in 1848 until his death in 1873; during this period he wrote many editorials on postal topics.

57. Leavitt, Joshua, An Essay on the Best Way of Developing Improved Political and Commercial Relations between Great Britain and the United States of America (London, 1869), 20, 23.

63. The originator of the facile, question-begging, and maddeningly anachronistic characterization of the nineteenth-century electric telegraph network as the “Victorian internet” is Tom Standage, The Victorian Internet: The Remarkable Story of the Telegraph and the Nineteenth-Century’s On-line Pioneers (New York, 1998).

65. For a related, though distinct, formulation of the relationship between politics and artifacts, which posits a causal relationship not from politics to artifacts, but the other way around, see Langdon Winner, “Do Artifacts Have Politics?” Daedalus 109 (Winter 1980): 121–36.