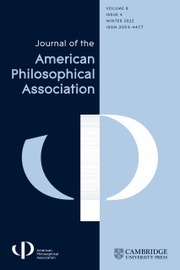 Journal of the American Philosophical Association

A Normative Theory of Disagreement

Expressivists have trouble accounting for disagreement. If ethical or other normative judgments are desire-like rather than belief-like, it is puzzling why we think people often disagree in those domains. While previous expressivists have proposed only straightforwardly descriptive conditions under which disagreement occurs, we argue that disagreement itself should be understood normatively: two or more people disagree just in case their diverging attitudes imply, given a common project of theirs, that at least one of them has reason to change his or her mind.

A Normative Theory of Disagreement
×

A Normative Theory of Disagreement
×

A Normative Theory of Disagreement
×
×