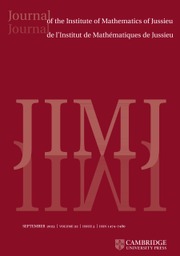 Journal of the Institute of Mathematics of Jussieu

ON THE EXISTENCE OF NON-NORM-ATTAINING OPERATORS

In this article, we provide necessary and sufficient conditions for the existence of non-norm-attaining operators in

$\mathcal {L}(E, F)$ . By using a theorem due to Pfitzner on James boundaries, we show that if there exists a relatively compact set K of

$0$ is an element of its closure (in the weak operator topology) but it is not in its norm-closed convex hull, then we can guarantee the existence of an operator that does not attain its norm. This allows us to provide the following generalisation of results due to Holub and Mujica. If E is a reflexive space, F is an arbitrary Banach space and the pair

$(E, F)$ has the (pointwise-)bounded compact approximation property, then the following are equivalent:

$\tau _c$ denotes the topology of compact convergence. We conclude the article by presenting a characterisation of the Schur property in terms of norm-attaining operators.

Primary: 46B20: Geometry and structure of normed linear spaces
Secondary: 46B10: Duality and reflexivity 46B28: Spaces of operators; tensor products; approximation properties

ON THE EXISTENCE OF NON-NORM-ATTAINING OPERATORS
×

ON THE EXISTENCE OF NON-NORM-ATTAINING OPERATORS
×

ON THE EXISTENCE OF NON-NORM-ATTAINING OPERATORS
×
×