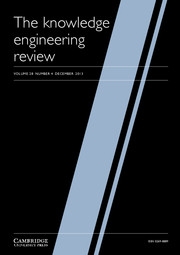 The diagnosis of brain tumours is typically based on clinical symptoms, radiological appearance and, often, a histopathological diagnosis of a biopsy. Since treatment of histologically or radiologically similar tumours can vary widely according to their specific nature and patient's characteristics, accurate non-invasive diagnosing techniques are highly sought after in the neuro-oncological practice.

Computational intelligence can arguably contribute to enhancing current imaging and spectroscopy-based diagnosis of brain tumours by applying heuristic methods that can learn, adapt, and evolve over time. In particular, this special issue reports the state of the art in intelligent agents, security, knowledge representation, machine learning, clinical data management, and interactive user interfaces in the context of the HealthAgents project.

Funded by the European Commission from January 2006 to December 2008, HealthAgents was a successful trans-European interdisciplinary research project which employed over 50 researchers for the improvement of brain tumour diagnosis (Arús et al., Reference Arús, Celda, Dasmahapatra, Dupplaw, González-Vélez, Van Huffel, Lewis, Lluch i Ariet, Mier, Peet and Robles2006). The HealthAgents consortium evolved from a cross-disciplinary collaboration among European partners, to a unique amalgam of areas of expertise. It comprised two commercial companies, one research institute, and six universities, and concentrated a unique group of well-accomplished, highly computer-literate researchers, most with doctoral degrees in biomedicine, radiology, biology, mathematics, or computer science.

2 Contents of this issue

This special issue contains six original articles and intends to reflect the project's progress from the standpoints of the different research groups involved. The main aim of this issue is to illustrate how the HealthAgents project has contributed to advance the field of computational intelligence applied to neuro-oncological diagnosis. Nevertheless, it is important to emphasize that all the distinct research contributions have been organized as coordinated building blocks of the HealthAgents DSS, the raison d’être of the entire project.

Entitled ‘A knowledge-rich distributed decision support framework: a case study for brain tumour diagnosis’ by Dupplaw et al., the first contribution adumbrates the HealthAgents framework with special emphasis on the intelligent agent and semantic web technologies employed to interconnect the contributing clinical centres. The framework underpins all the software development of the DSS, since it deploys the foundations for the data exchange among brain tumour classifiers and repositories on a local and global basis.

The second contribution is ‘The design and implementation of a novel security model for HealthAgents’ by Xiao et al. and describes the HealthAgents multi-layer security model. It identifies the link-anonymized data transportation, sharing and collection services as well as the access control mechanism. The model had to comply not only with the DSS technical requirements, but also with the legal regulations of the different countries involved.

Used to represent knowledge across the project, the HealthAgents ontology is explained by Hu et al. in the fourth manuscript ‘The HealthAgents ontology: knowledge representation in a distributed DSS for brain tumours’. The ontology played three crucial roles in the DSS: the common vocabulary for different databases, the shared conceptual repository for clinical terminology, and the translation template for legacy/existing data descriptors.

Described in the fifth article, ‘A web accessible distributed data warehouse for brain tumour diagnosis’, authored by Estanyol et al., the database allows the DSS to be integrated with the graphical user interface to trigger the different classifiers. This database can be understood as a clinical tool providing clinical history, medical control, and medical experiment management.

Finally, ‘The development of a graphical user interface, functional elements and classifiers for the non-invasive characterization of childhood brain tumours using magnetic resonance spectroscopy’ by Gibb et al. outlines the design of the interactive clinical user interface of the project, which acted as the DSS front-end. As opposed to previous interfaces employed in medical imaging, the HealthAgents approach entailed an active participation of clinicians and was validated using a sample of children with cerebellar malignancies.

In summary, by providing a distributed agent-based evidence-based DSS, the HealthAgents project has broadened the ambit of machine learning classification, allowing classifiers to be built using geographically dispersed data sources, while keeping patient anonymity and data integrity. The HealthAgents project has deployed an evidence-based heuristic approach for the diagnosis of heterogeneous brain tumour types, displayed through an interactive graphical user interface that fitted the neuro-oncological practice.

Special thanks are owed to the following reviewers for their valuable suggestions and comments on the articles in this special issue:

A special mention to Samantha Lyle of EnglishProofreading.co.uk for her precise attention to detail when proofreading the reviewed papers. The entire HealthAgents project was funded by the Information Society Technologies priority of the European Commission Sixth Framework Programme as a Specific Targeted Research Project with contract number IST-2004-272141 from 1 January 2006 to 31 December 2008.