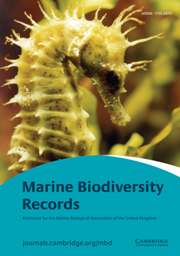 Our paper describes the first record of Neoharriotta pinnata from the Bay of Bengal region of the Indian Ocean. A single specimen of a male N. pinnata had a total length of 1040 mm, weighing 1750 g. We explain its extended distribution towards the north-eastern Indian Ocean.

A single specimen of N. pinnata was recorded for the first time from the Bay of Bengal region of the Indian Ocean from Nagapattinam landing centre (10.76°N 79.84°E) Tamil Nadu, south-east coast of India on 26 January 2010. Based on interviews with a boat crew, it is confirmed that the present specimen was caught at a depth of 400–600 m during deep water otter trawl net operation towards the east of the Nagapattinam coast, from the Bay of Bengal. Based on the identification keys of Didier (Reference Didier1995) and Didier & Stehmann (Reference Didier and Stehmann1996) the specimen was confirmed as N. pinnata. The total length of the specimen is 1040 mm and weight, 1750g. The details of morphometric and meristic characters are given in Table 1. The specimen is preserved in the Museum of the CAS in Marine Biology, Faculty of Marine Sciences, Annamalai University, India (catalogue No. 646).

Body elongated, snout long, pointed moderately flaccid with large tentaculum on its mid-dorsal surface and pair of grasping prepelvic tentacula. The recorded specimen of N. pinnata was identified as adult male with bulbous, denticulate frontal tentaculum that rests in a pouch atop the head anterior to eyes; prepelvic tentaculae blade-like with large denticles along the medial edge, hidden in pouches anterior to the pectoral fins, and slender, rod—from pelvic fins with small, fleshy denticulate tip (Figure 1). Lateral line well comprising straight, closely arranged sensory hillocks. The angular (maxillary) mucous canal loop has a tapering and bluntly rounded angular loop that connects on either side with the terminating suborbital canal. The branches of the suborbital canals have a distinct lateral flexure anteriorly. Colour dark brown. Morphometric and meristic details following Didier (Reference Didier1995) and Didier & Stehmann (Reference Didier and Stehmann1996) and the specimen compared with male (juvenile) obtained by Silas & Selvaraj (Reference Silas and Selvaraj1980) are given in Table 1.

The long nose chimaeras (family Rhinochimaeridae) have a wide range distribution in the Atlantic, Pacific and Indian Oceans, but there are many gaps in its range distribution that probably reflect the general paucity of knowledge about occurrence and distribution of deep-benthic Chondrichthyes in most areas.

Silas et al. (Reference Silas, Selvaraj and Regunathan1969) reported the occurrence of the chimaeroid fish N. pinnata from the upper continental slope off the south-west coast of India. Silas & Selvaraj (Reference Silas and Selvaraj1980) reported 7 specimens of N. pinnata from the south-west coast of India, of which 2 specimens were adult females and the remaining 5 specimens were juveniles, of which 2 were males and 3 were females.

The occurrence and distribution of N. pinnata are restricted only to the eastern Atlantic and western Indian Ocean, particularly in the Arabian Sea. It is interesting to note that the present record of N. pinnata in Bay of Bengal waters throws new light on the eastward extension of its distribution. Based on personal interviews with the crew of a fishing boat it is confirmed that the present specimen was caught from the Bay of Bengal. The reasons for the occurrence of N. pinnata in the Bay of Bengal are not clearly understood, but the possible reasons might be attributed to changes in hydrography and current pattern that might trigger its migration and its extended distribution towards the north- eastern Indian Ocean. Based on the occurrence of a single specimen of N. pinnata, this record cannot be scientifically verified and more detailed research is warranted.

The authors are grateful to Professor T. Balasubramanian, Dean, Faculty of Marine Sciences, and the authorities of Annamalai University for encouragement and facilities, and the Department of Biotechnology, Government of India for financial support.