Geologists have long studied the effects of high pressure on water in the porous media of rocks and minerals in the earth’s crust, mainly to explore deformation properties. Now Gloria Tabacchi, a computational chemist at the University of Insubria, Italy, has enlisted the help of her earth science colleagues to study the effects of high pressure on an ethanol/water solution in the channels of a zeolite. The result is a new material that separates ethanol dimers in one channel of the zeolite and water tetramers in another channel. Perhaps most significantly, the material maintains its structure when the pressure is removed, opening up the possibility of room temperature, ambient pressure devices that could separate more complex molecules for various applications, such as solar energy conversion.

“Usually, when you create something under pressure, all the interesting properties disappear when you release the pressure,” Tabacchi says. “So this was a very nice surprise.”

In this proof-of-principle research published in a recent issue of Angewandte Chemie (doi:10.1002/anie.201610949), the investigators chose a simple ethanol/water solution because it was easier to study experimentally and computationally. Also, the solution is not explosive at high pressures. They chose the hydrophobic all-silica zeolite ferrierite (Si-FER, formula Si36O72) because it has channels that intersect to form two-dimensional (2D) arrays, along with the right diameters to contain the ethanol and water molecules. They hypothesized that high pressure might enhance the shape-directing action of the zeolite matrix, triggering the formation of organized arrangements.

Experimentally, the geologists, led by Rossella Arletti of the Department of Earth Sciences at the University of Turin, Italy, injected a 1:3 solution of ethanol and water into the zeolite at pressures ranging from 0.20 to 1.34 GPa using a diamond anvil cell. They analyzed the resulting material using high-pressure synchrotron x-ray powder diffraction. At 0.84 GPa, the x-ray analysis showed the inclusion of four ethanol molecules and 6–8 water molecules per unit cell. 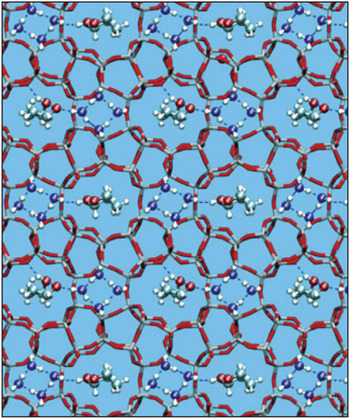 Further study of the model revealed that the ethanol molecules formed wires of hydrogen-bonded dimers, while the water molecules formed square tetramers with a closed chain of strong hydrogen bonds. Surprisingly, the zeolite/water/ethanol structure remained stable when the simulation was performed with the cell parameters found experimentally when pressure was fully released.

“At first, we hadn’t checked the material to see if it had remained the same at ambient pressure,” Tabacchi says. But the experimentalists quickly confirmed that the ethanol dimers and water tetramers were still in place in the zeolite channels at ambient pressure. This validated the discovery. “We had taken a disordered liquid solution and converted it into a new material—a solid with a normal distribution of water and ethanol,” Tabacchi says.

The researchers theorize that perhaps the high pressure causes some slight modification of the structure that makes the material stable at ambient pressure as well. Separating ethanol from water is a key issue in biofuel production, so this zeolite might have a practical application. Tabacchi envisions trying more complex systems with a different zeolite to accommodate molecules of larger size, like the chromophores of a dye, to create a material featuring a 2D arrangement of photoactive molecules that perhaps can capture solar energy more efficiently than is now possible.

“Beautiful and fascinating” is how Gion Calzaferri, a professor in the Department of Chemistry and Biochemistry at the University of Bern, Switzerland, who was not involved in this research, describes the work. “The discovery of this host–guest composite allows us to dream about materials having fascinating physical (and perhaps also chemical) properties we have not seen so far. It may be the beginning of a new area of research exploring one-dimensional nanomaterials based on two different parallel running molecular wires.”