A collaboration between Chad Mirkin of Northwestern University and Sharon Glotzer of the University of Michigan has led to the creation of the most complex colloidal crystal synthesized to date, as reported recently in Science (doi:10.1126/science.aam7927). Their combined work, for which Mirkin’s group provided the nanocrystals and Glotzer’s group performed the thermodynamic simulations, demonstrates that researchers may soon be able to predict and control the formation of exotic crystals at the nanometer level.

Since 1996, Mirkin’s group has been leading the field in DNA-functionalized nanoparticle assembly. In this technique, a monodisperse sample of nanoparticles is coated with strands of DNA. The tip of each DNA ligand is single-stranded, and these tips can be made complementary to each other, causing the particles to bind. According to Mirkin, “You can begin to think of particles as atoms, and DNA and variants of it as chemical bonds.” In atoms, the valence shell describes the number of bonds an atom can form. Here, Glotzer says the “[nanoparticle’s] shape imparts a valence” determining the DNA bonding interactions. This has led to a versatile way to form colloidal crystals; Mirkin’s group has created over 500 different crystals spanning over 35 different symmetries. 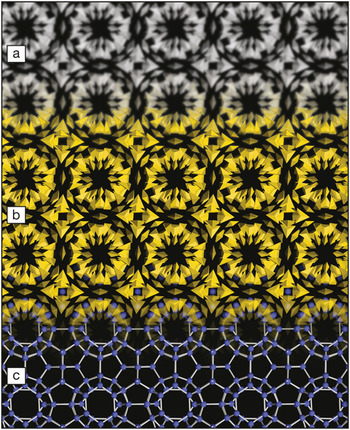 To produce the clathrate crystals—that is, “structures consisting of polyhedral cages with large pores that can be used for host–guest chemistry”—Mirkin’s group coated triangular bipyramid gold nanoparticles with a dense layer of self-complementary DNA. The angles of the bipyramid (∼110°) closely matched the bonding angles observed in molecular clathrates (100–125°), causing these cage-like structures to form when the surfaces of the particles were functionalized with DNA. “These structures are significantly more complex than structures that have been created previously with this technique,” says John Crocker, a professor at the University of Pennsylvania who works on similar DNA-functionalized nanoparticle assemblies, but was not involved with this work.

The researchers in Mirkin’s group found that they could control the type of clathrate formed with the help of the Glotzer group’s simulations by adjusting the size of the DNA shell. Experimentally, the length of the DNA shell was increased, giving rise to a series of slightly different structures. The longer DNA shell gives the nanoparticles more freedom during assembly, which leads them to optimize into different clathrates. The simulations were able to reproduce each of these structures. Glotzer and Mirkin attribute this to an interplay between geometry and interactions that maximize binding between the nanoparticles. As the coatings get thicker, the sharp triangular bipyramids become more rounded, which allows the particles to explore a range of different bonding angles. Glotzer thinks of the DNA as “a string between the nanoparticles” and that lengthening the string means the nanoparticles “have more thermal motion to find their optimal position.” This flexibility in bonding angle led to higher quality clathrates with larger internal cages.

This flexibility afforded by changing the DNA ligand length could be the next step in crystal engineering and more exciting than finding a use for the clathrate cages themselves. Applications for complex clathrate structures abound: molecular clathrates encapsulate gases such as methane, and these mesoscale cages produced by Mirkin could potentially hold biological units such as cells. More importantly, Glotzer’s model demonstrates that for a given nanoparticle shape, a class of crystal architectures may be predictable by simply varying the DNA length. This could lead to what Mirkin describes as a “reliable set of design rules for engineering crystal structures.” His excitement is shared by others in the field. According to Crocker, Glotzer has been “making predictions of incredibly complicated structures formed from polyhedra for several years” (see Nature Materials, doi:0.1038/nmat4152) and this work demonstrates that these structures are “accessible and realizable with DNA.”