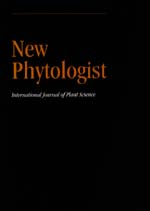 Interspecific C transfer was studied in laboratory microcosms containing pairs of 6-month-old Betula papyrifera Marsh. and Pseudotsuga menziesii (Mirb.) Franco seedlings growing in individual, root-restrictive (28 μm pore size) pouches filled with field soil. Interspecific transfer was examined by reciprocal labelling of seedlings with 13CO2(gas) and 14CO2(gas). At the time of labelling, the root zones of ectomycorrhizal (EM) B. papyrifera and P. menziesii were interconnected by an extensive network of EM mycelium. Carbon transferred through EM connections was distinguished from that through soil pathways by comparing microcosms where interconnecting hyphae were left intact vs. those where they were severed immediately before labelling.

Transfer was bidirectional, and represented 5% of total isotope uptake by both B. papyrifera and P. menziesii together. P. menziesii received on average 50% more 14C and 66% more 13C from paper birch than vice versa, however, differences between species were not statistically significant. Neither net nor bidirectional transfer differed between severing treatments, leaving in question the relative importance of EM hyphae versus soil transfer pathways. The tendency for P. menziesii to receive more isotope than B. papyrifera corresponded with a 10-fold greater net photosynthetic rate per seedling and two-fold greater foliar N concentration of B. papyrifera than P. menziesii.