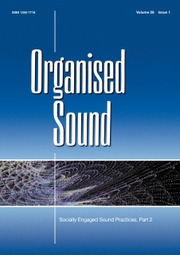 An aspect of the local/global binarism in music regards the cultural identity of the sounds, musical styles and grammars of a composition. This article intends to explore the role of the local/global issue in the context of the semantic dimension of sounds, both during the composition of a musical piece and during its reception.

In the first part of the article the local or global identity of a sonic event will be examined from two different perspectives: on the one hand that of the composer, starting from his or her attitudes with regard to the semantic aspects of the sonic material and the compositional processes used; on the other hand that of the listener, starting from the cognitive processes (s)he activates in the search for a musical and an extramusical meaning. Based on this analysis, in the second part of the article the usefulness of describing the cultural identity of a sonic event and more generally its semantic dimensions in terms of ‘shared connotations’ will be explored. Finally, some of the interactions between connoted sonic events will be analysed, mainly focusing on global and local cultural identities.

The voice of Ghulam Nabi’s father, its automatic transcription and an excerpt of Fabio Cifariello