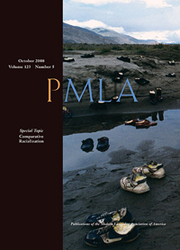 Reflections on the Volume “Race,” Writing, and Difference

Reflections on the Volume Racial Formation in the United States