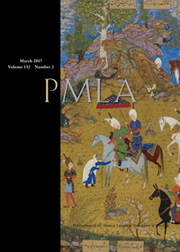 On Rita Felski's The Limits of Critique

The Exotic and the Autoexotic