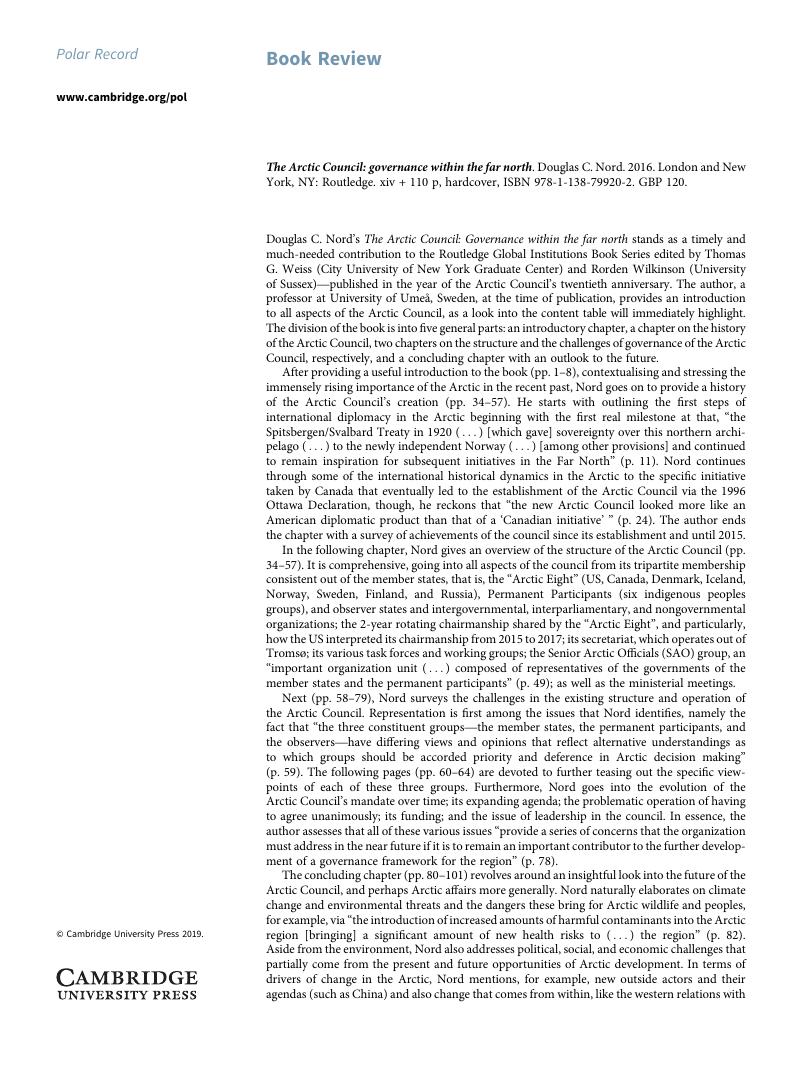 After providing a useful introduction to the book (pp. 1–8), contextualising and stressing the immensely rising importance of the Arctic in the recent past, Nord goes on to provide a history of the Arctic Council’s creation (pp. 34–57). He starts with outlining the first steps of international diplomacy in the Arctic beginning with the first real milestone at that, “the Spitsbergen/Svalbard Treaty in 1920 (…) [which gave] sovereignty over this northern archipelago (…) to the newly independent Norway (…) [among other provisions] and continued to remain inspiration for subsequent initiatives in the Far North” (p. 11). Nord continues through some of the international historical dynamics in the Arctic to the specific initiative taken by Canada that eventually led to the establishment of the Arctic Council via the 1996 Ottawa Declaration, though, he reckons that “the new Arctic Council looked more like an American diplomatic product than that of a ‘Canadian initiative’ ” (p. 24). The author ends the chapter with a survey of achievements of the council since its establishment and until 2015.

In the following chapter, Nord gives an overview of the structure of the Arctic Council (pp. 34–57). It is comprehensive, going into all aspects of the council from its tripartite membership consistent out of the member states, that is, the “Arctic Eight” (US, Canada, Denmark, Iceland, Norway, Sweden, Finland, and Russia), Permanent Participants (six indigenous peoples groups), and observer states and intergovernmental, interparliamentary, and nongovernmental organizations; the 2-year rotating chairmanship shared by the “Arctic Eight”, and particularly, how the US interpreted its chairmanship from 2015 to 2017; its secretariat, which operates out of Tromsø; its various task forces and working groups; the Senior Arctic Officials (SAO) group, an “important organization unit (…) composed of representatives of the governments of the member states and the permanent participants” (p. 49); as well as the ministerial meetings.

Next (pp. 58–79), Nord surveys the challenges in the existing structure and operation of the Arctic Council. Representation is first among the issues that Nord identifies, namely the fact that “the three constituent groups—the member states, the permanent participants, and the observers—have differing views and opinions that reflect alternative understandings as to which groups should be accorded priority and deference in Arctic decision making” (p. 59). The following pages (pp. 60–64) are devoted to further teasing out the specific viewpoints of each of these three groups. Furthermore, Nord goes into the evolution of the Arctic Council’s mandate over time; its expanding agenda; the problematic operation of having to agree unanimously; its funding; and the issue of leadership in the council. In essence, the author assesses that all of these various issues “provide a series of concerns that the organization must address in the near future if it is to remain an important contributor to the further development of a governance framework for the region” (p. 78).

The concluding chapter (pp. 80–101) revolves around an insightful look into the future of the Arctic Council, and perhaps Arctic affairs more generally. Nord naturally elaborates on climate change and environmental threats and the dangers these bring for Arctic wildlife and peoples, for example, via “the introduction of increased amounts of harmful contaminants into the Arctic region [bringing] a significant amount of new health risks to (…) the region” (p. 82). Aside from the environment, Nord also addresses political, social, and economic challenges that partially come from the present and future opportunities of Arctic development. In terms of drivers of change in the Arctic, Nord mentions, for example, new outside actors and their agendas (such as China) and also change that comes from within, like the western relations with Russia that have gone sour after the annexation of the Crimean Peninsula. Concerning an assessment of the overall needs of the Arctic going forward, Nord identifies “knowledge, understanding, and action” (p. 89) to be central: for example, filling in knowledge gaps, advancing Arctic research, and then also actually acting on the broad range of Arctic issues. Nord ends with enumerating some necessary reforms for the Arctic Council, most pressingly to transform into a full-fledged international organisation. He ends this chapter with the “most urgent need for both the Arctic and the Arctic Council (…) [which he sees as] the development of a more commonly shared vision of their character and future” (p. 98)—a true vision for the Arctic.

Next, to the aforementioned main parts of The Arctic Council, Nord includes a short two-page select bibliography at the end. For the reader who is unfamiliar with the topic, this is a beneficial section highlighting different important works of secondary literature on various aspects associated with Arctic diplomacy and Arctic issues, as well as history thereof.

All in all, the survey-like nature of the book would make it an ideal candidate for a textbook assignment in a college-level course on international organisations or a specialised course on the Arctic. While for the college student and those getting into the field of Arctic affairs the entirety of the book may present invaluable information and a reliable reference work to come back to from time to time, specialists on the Arctic Council may find the chapters on governance challenges and the future of the Arctic Council particularly interesting.