A Journal of Arctic and Antarctic Research 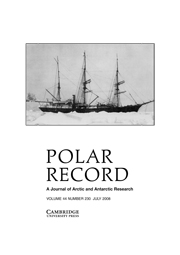