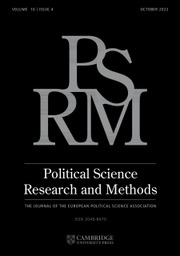 Commitment Problems in Coalitions: A New Look at the Fiscal Policies Of Multiparty Governments*

Commitment Problems in Coalitions: A New Look at the Fiscal Policies Of Multiparty Governments*
×

Commitment Problems in Coalitions: A New Look at the Fiscal Policies Of Multiparty Governments*
×

Commitment Problems in Coalitions: A New Look at the Fiscal Policies Of Multiparty Governments*
×
×