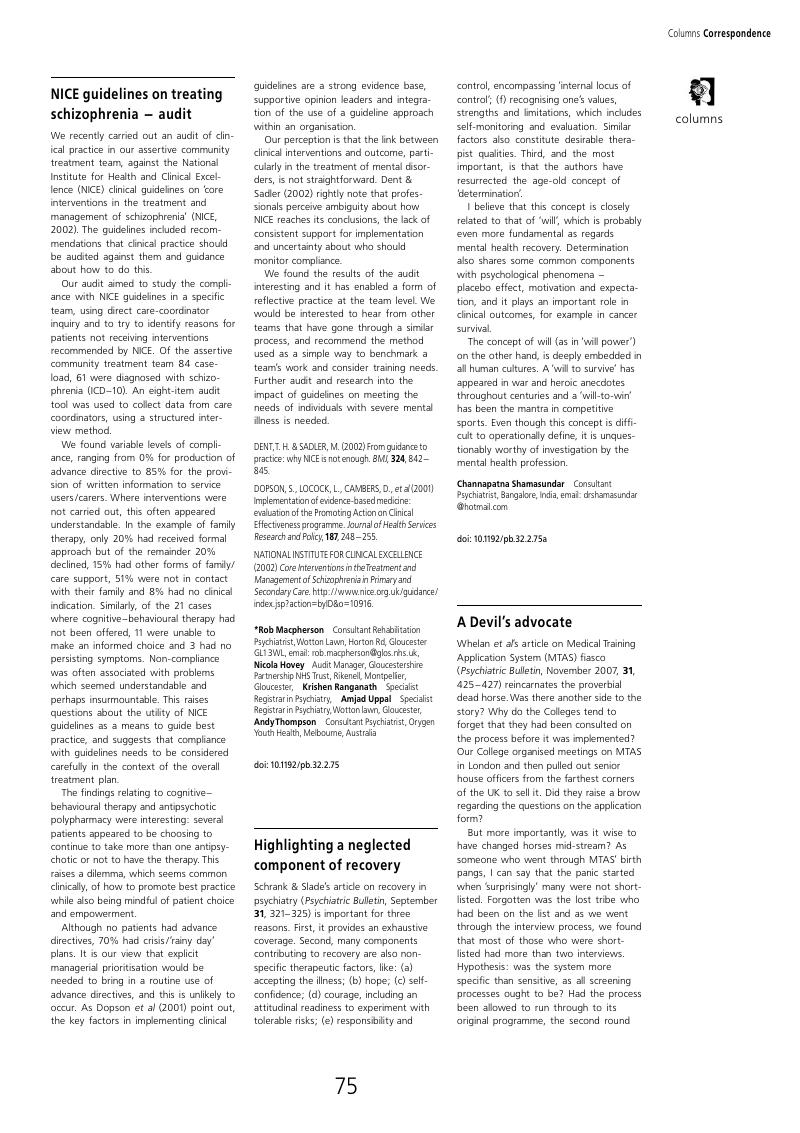 An abstract is not available for this content so a preview has been provided. To view the full text please use the links above to select your preferred format.
Type
The Columns
Information
Psychiatric Bulletin , Volume 32 , Issue 2 , February 2008 , pp. 75
DOI: https://doi.org/10.1192/pb.32.2.75[Opens in a new window]
Creative Commons
This is an Open Access article, distributed under the terms of the Creative Commons Attribution (CC-BY) license (http://creativecommons.org/licenses/by/4.0/), which permits unrestricted re-use, distribution, and reproduction in any medium, provided the original work is properly cited.
Copyright
Copyright © Royal College of Psychiatrists, 2008

We recently carried out an audit of clinical practice in our assertive community treatment team, against the National Institute for Health and Clinical Excellence (NICE) clinical guidelines on ‘core interventions in the treatment and management of schizophrenia’ (NICE, 2002). The guidelines included recommendations that clinical practice should be audited against them and guidance about how to do this.

Our audit aimed to study the compliance with NICE guidelines in a specific team, using direct care-coordinator inquiry and to try to identify reasons for patients not receiving interventions recommended by NICE. Of the assertive community treatment team 84 case-load, 61 were diagnosed with schizophrenia (ICD–10). An eight-item audit tool was used to collect data from care coordinators, using a structured interview method.

We found variable levels of compliance, ranging from 0% for production of advance directive to 85% for the provision of written information to service users/carers. Where interventions were not carried out, this often appeared understandable. In the example of family therapy, only 20% had received formal approach but of the remainder 20% declined, 15% had other forms of family/care support, 51% were not in contact with their family and 8% had no clinical indication. Similarly, of the 21 cases where cognitive–behavioural therapy had not been offered, 11 were unable to make an informed choice and 3 had no persisting symptoms. Non-compliance was often associated with problems which seemed understandable and perhaps insurmountable. This raises questions about the utility of NICE guidelines as a means to guide best practice, and suggests that compliance with guidelines needs to be considered carefully in the context of the overall treatment plan.

The findings relating to cognitive–behavioural therapy and antipsychotic polypharmacy were interesting: several patients appeared to be choosing to continue to take more than one antipsychotic or not to have the therapy. This raises a dilemma, which seems common clinically, of how to promote best practice while also being mindful of patient choice and empowerment.

Although no patients had advance directives, 70% had crisis/’rainy day’ plans. It is our view that explicit managerial prioritisation would be needed to bring in a routine use of advance directives, and this is unlikely to occur. As Dopson et al (Reference Dopson, Locock and Cambers2001) point out, the key factors in implementing clinical guidelines are a strong evidence base, supportive opinion leaders and integration of the use of a guideline approach within an organisation.

Our perception is that the link between clinical interventions and outcome, particularly in the treatment of mental disorders, is not straightforward. Dent & Sadler (Reference Dent and Sadler2002) rightly note that professionals perceive ambiguity about how NICE reaches its conclusions, the lack of consistent support for implementation and uncertainty about who should monitor compliance.

We found the results of the audit interesting and it has enabled a form of reflective practice at the team level. We would be interested to hear from other teams that have gone through a similar process, and recommend the method used as a simple way to benchmark a team's work and consider training needs. Further audit and research into the impact of guidelines on meeting the needs of individuals with severe mental illness is needed.