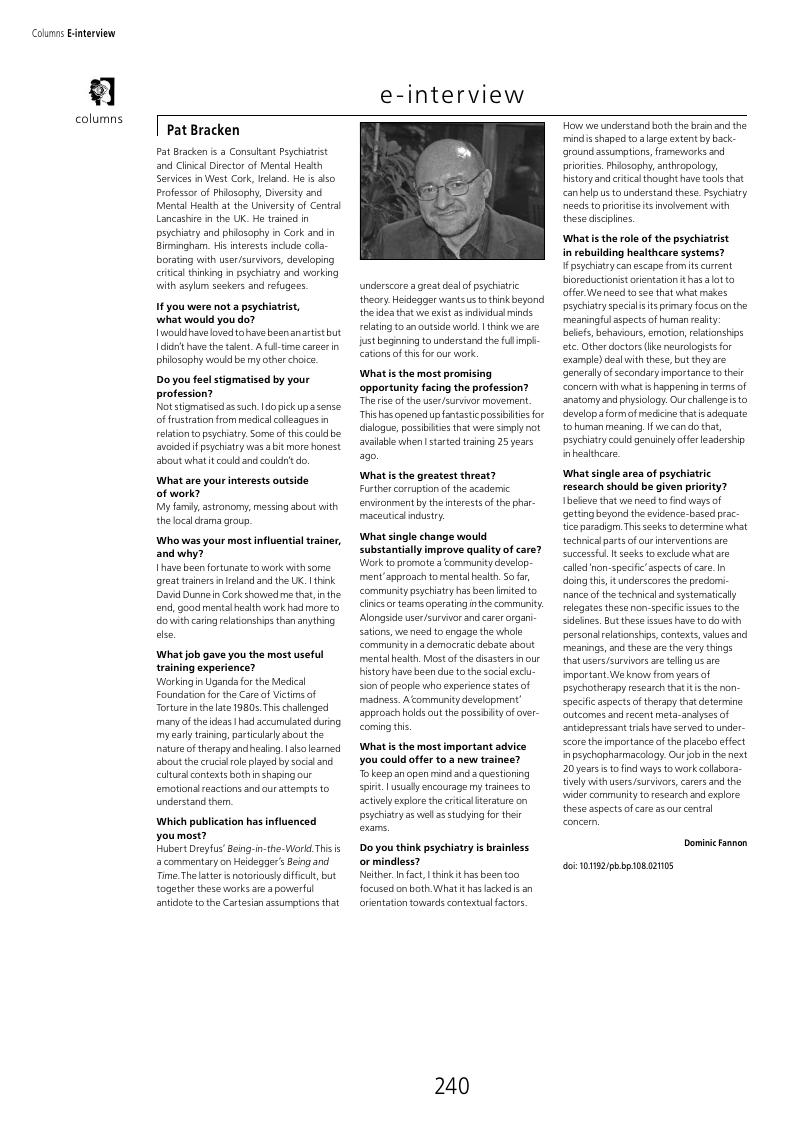 An abstract is not available for this content so a preview has been provided. To view the full text please use the links above to select your preferred format.
Type
The columns
Information
Psychiatric Bulletin , Volume 32 , Issue 6 , June 2008 , pp. 240
DOI: https://doi.org/10.1192/pb.bp.108.021105[Opens in a new window]
Creative Commons
This is an Open Access article, distributed under the terms of the Creative Commons Attribution (CC-BY) license (http://creativecommons.org/licenses/by/4.0/), which permits unrestricted re-use, distribution, and reproduction in any medium, provided the original work is properly cited.
Copyright
Copyright © Royal College of Psychiatrists, 2008

Pat Bracken is a Consultant Psychiatrist and Clinical Director of Mental Health Services in West Cork, Ireland. He is also Professor of Philosophy, Diversity and Mental Health at the University of Central Lancashire in the UK. He trained in psychiatry and philosophy in Cork and in Birmingham. His interests include collaborating with user/survivors, developing critical thinking in psychiatry and working with asylum seekers and refugees.

I would have loved to have been an artist but I didn't have the talent. A full-time career in philosophy would be my other choice.

Not stigmatised as such. I do pick up a sense of frustration from medical colleagues in relation to psychiatry. Some of this could be avoided if psychiatry was a bit more honest about what it could and couldn't do.

My family, astronomy, messing about with the local drama group.

I have been fortunate to work with some great trainers in Ireland and the UK. I think David Dunne in Cork showed me that, in the end, good mental health work had more to do with caring relationships than anything else.

Working in Uganda for the Medical Foundation for the Care of Victims of Torture in the late 1980s. This challenged many of the ideas I had accumulated during my early training, particularly about the nature of therapy and healing. I also learned about the crucial role played by social and cultural contexts both in shaping our emotional reactions and our attempts to understand them.

Hubert Dreyfus’ Being-in-the-World. This is a commentary on Heidegger's Being and Time. The latter is notoriously difficult, but together these works are a powerful antidote to the Cartesian assumptions that underscore a great deal of psychiatric theory. Heidegger wants us to think beyond the idea that we exist as individual minds relating to an outside world. I think we are just beginning to understand the full implications of this for our work. 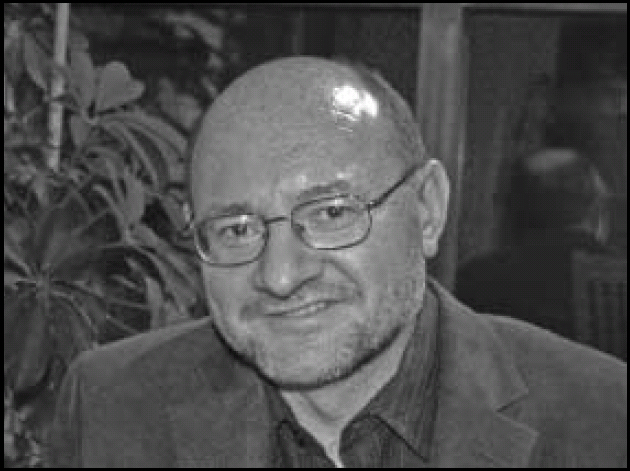 The rise of the user/survivor movement. This has opened up fantastic possibilities for dialogue, possibilities that were simply not available when I started training 25 years ago.

Further corruption of the academic environment by the interests of the pharmaceutical industry.

Work to promote a ‘community development’ approach to mental health. So far, community psychiatry has been limited to clinics or teams operating in the community. Alongside user/survivor and carer organisations, we need to engage the whole community in a democratic debate about mental health. Most of the disasters in our history have been due to the social exclusion of people who experience states of madness. A ‘community development’ approach holds out the possibility of overcoming this.

To keep an open mind and a questioning spirit. I usually encourage my trainees to actively explore the critical literature on psychiatry as well as studying for their exams.

Neither. In fact, I think it has been too focused on both. What it has lacked is an orientation towards contextual factors. How we understand both the brain and the mind is shaped to a large extent by background assumptions, frameworks and priorities. Philosophy, anthropology, history and critical thought have tools that can help us to understand these. Psychiatry needs to prioritise its involvement with these disciplines.

If psychiatry can escape from its current bioreductionist orientation it has a lot to offer. We need to see that what makes psychiatry special is its primary focus on the meaningful aspects of human reality: beliefs, behaviours, emotion, relationships etc. Other doctors (like neurologists for example) deal with these, but they are generally of secondary importance to their concern with what is happening in terms of anatomy and physiology. Our challenge is to develop a form of medicine that is adequate to human meaning. If we can do that, psychiatry could genuinely offer leadership in healthcare.

I believe that we need to find ways of getting beyond the evidence-based practice paradigm. This seeks to determine what technical parts of our interventions are successful. It seeks to exclude what are called ‘non-specific’ aspects of care. In doing this, it underscores the predominance of the technical and systematically relegates these non-specific issues to the sidelines. But these issues have to do with personal relationships, contexts, values and meanings, and these are the very things that users/survivors are telling us are important. We know from years of psychotherapy research that it is the non-specific aspects of therapy that determine outcomes and recent meta-analyses of antidepressant trials have served to underscore the importance of the placebo effect in psychopharmacology. Our job in the next 20 years is to find ways to work collaboratively with users/survivors, carers and the wider community to research and explore these aspects of care as our central concern.