Irish Philosophy in the Age of Berkeley 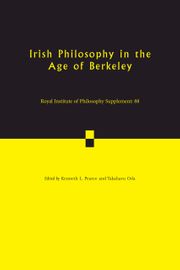 Notes on the Contributors