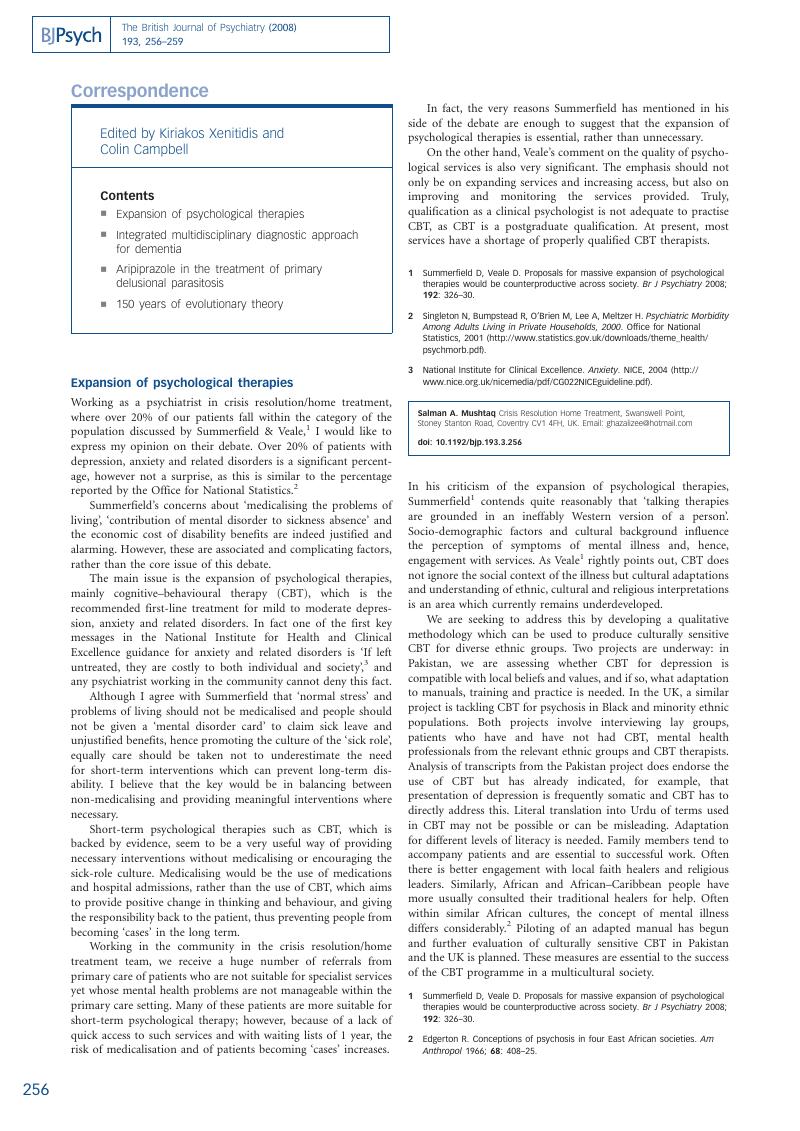 An abstract is not available for this content so a preview has been provided. To view the full text please use the links above to select your preferred format.
Type
Columns
Information
The British Journal of Psychiatry , Volume 193 , Issue 3 , September 2008 , pp. 256 - 257
DOI: https://doi.org/10.1192/bjp.193.3.256a[Opens in a new window]
Copyright
Copyright © Royal College of Psychiatrists, 2008

In his criticism of the expansion of psychological therapies, Summerfield Reference Summerfield and Veale1 contends quite reasonably that ‘talking therapies are grounded in an ineffably Western version of a person’. Socio-demographic factors and cultural background influence the perception of symptoms of mental illness and, hence, engagement with services. As Veale Reference Summerfield and Veale1 rightly points out, CBT does not ignore the social context of the illness but cultural adaptations and understanding of ethnic, cultural and religious interpretations is an area which currently remains underdeveloped.

We are seeking to address this by developing a qualitative methodology which can be used to produce culturally sensitive CBT for diverse ethnic groups. Two projects are underway: in Pakistan, we are assessing whether CBT for depression is compatible with local beliefs and values, and if so, what adaptation to manuals, training and practice is needed. In the UK, a similar project is tackling CBT for psychosis in Black and minority ethnic populations. Both projects involve interviewing lay groups, patients who have and have not had CBT, mental health professionals from the relevant ethnic groups and CBT therapists. Analysis of transcripts from the Pakistan project does endorse the use of CBT but has already indicated, for example, that presentation of depression is frequently somatic and CBT has to directly address this. Literal translation into Urdu of terms used in CBT may not be possible or can be misleading. Adaptation for different levels of literacy is needed. Family members tend to accompany patients and are essential to successful work. Often there is better engagement with local faith healers and religious leaders. Similarly, African and African–Caribbean people have more usually consulted their traditional healers for help. Often within similar African cultures, the concept of mental illness differs considerably. Reference Edgerton2 Piloting of an adapted manual has begun and further evaluation of culturally sensitive CBT in Pakistan and the UK is planned. These measures are essential to the success of the CBT programme in a multicultural society.