Highlights of this issue 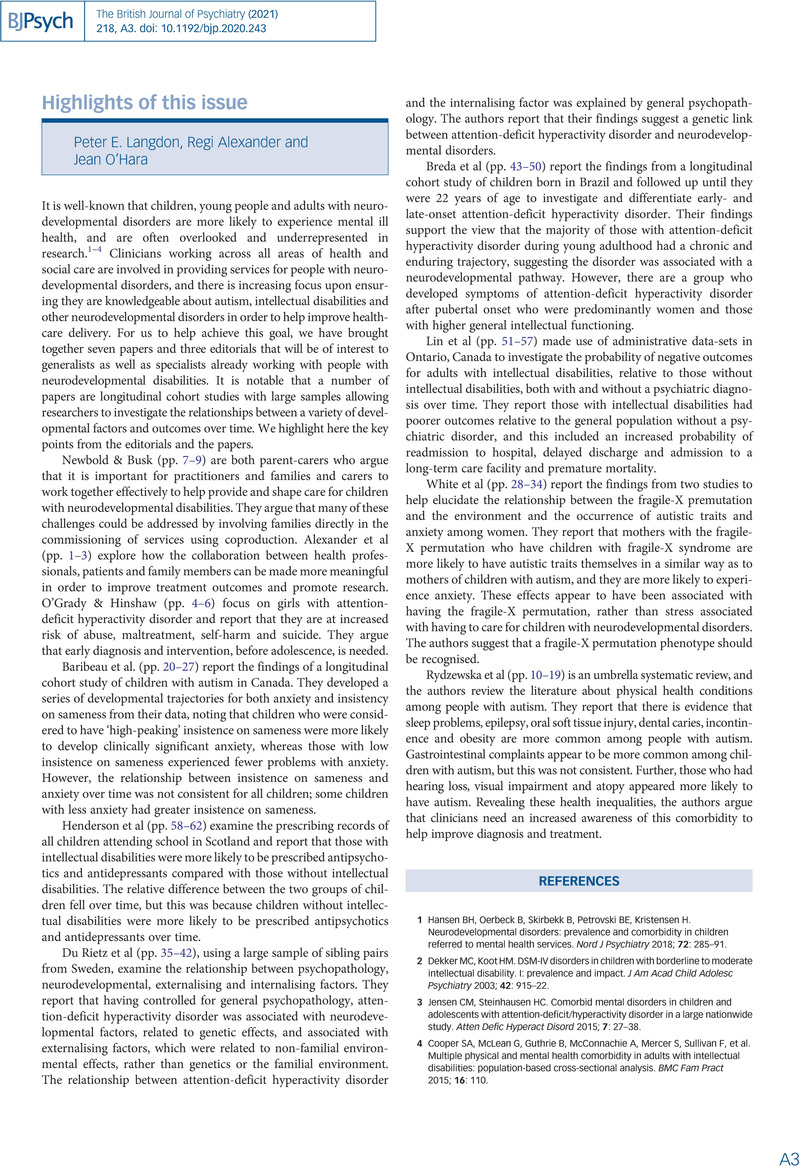 An abstract is not available for this content so a preview has been provided. To view the full text please use the links above to select your preferred format.
Type
Highlights of this issue
Information
The British Journal of Psychiatry , Volume 218 , Issue 1 , January 2021 , pp. A3
DOI: https://doi.org/10.1192/bjp.2020.243[Opens in a new window]

Copyright
Copyright © The Authors 2020. Published by Cambridge University Press on behalf of The Royal College of Psychiatrists

It is well-known that children, young people and adults with neurodevelopmental disorders are more likely to experience mental ill health, and are often overlooked and underrepresented in research.Reference Hansen, Oerbeck, Skirbekk, Petrovski and Kristensen1–Reference Cooper, McLean, Guthrie, McConnachie, Mercer and Sullivan4 Clinicians working across all areas of health and social care are involved in providing services for people with neurodevelopmental disorders, and there is increasing focus upon ensuring they are knowledgeable about autism, intellectual disabilities and other neurodevelopmental disorders in order to help improve healthcare delivery. For us to help achieve this goal, we have brought together seven papers and three editorials that will be of interest to generalists as well as specialists already working with people with neurodevelopmental disabilities. It is notable that a number of papers are longitudinal cohort studies with large samples allowing researchers to investigate the relationships between a variety of developmental factors and outcomes over time. We highlight here the key points from the editorials and the papers.

Newbold & Busk (pp. 7–9) are both parent-carers who argue that it is important for practitioners and families and carers to work together effectively to help provide and shape care for children with neurodevelopmental disabilities. They argue that many of these challenges could be addressed by involving families directly in the commissioning of services using coproduction. Alexander et al (pp. 1–3) explore how the collaboration between health professionals, patients and family members can be made more meaningful in order to improve treatment outcomes and promote research. O'Grady & Hinshaw (pp. 4–6) focus on girls with attention-deficit hyperactivity disorder and report that they are at increased risk of abuse, maltreatment, self-harm and suicide. They argue that early diagnosis and intervention, before adolescence, is needed.

Du Rietz et al (pp. 35–42), using a large sample of sibling pairs from Sweden, examine the relationship between psychopathology, neurodevelopmental, externalising and internalising factors. They report that having controlled for general psychopathology, attention-deficit hyperactivity disorder was associated with neurodevelopmental factors, related to genetic effects, and associated with externalising factors, which were related to non-familial environmental effects, rather than genetics or the familial environment. The relationship between attention-deficit hyperactivity disorder and the internalising factor was explained by general psychopathology. The authors report that their findings suggest a genetic link between attention-deficit hyperactivity disorder and neurodevelopmental disorders.

Rydzewska et al (pp. 10–19) is an umbrella systematic review, and the authors review the literature about physical health conditions among people with autism. They report that there is evidence that sleep problems, epilepsy, oral soft tissue injury, dental caries, incontinence and obesity are more common among people with autism. Gastrointestinal complaints appear to be more common among children with autism, but this was not consistent. Further, those who had hearing loss, visual impairment and atopy appeared more likely to have autism. Revealing these health inequalities, the authors argue that clinicians need an increased awareness of this comorbidity to help improve diagnosis and treatment.

Highlights of this issue
×

Highlights of this issue
×

Highlights of this issue
×
×