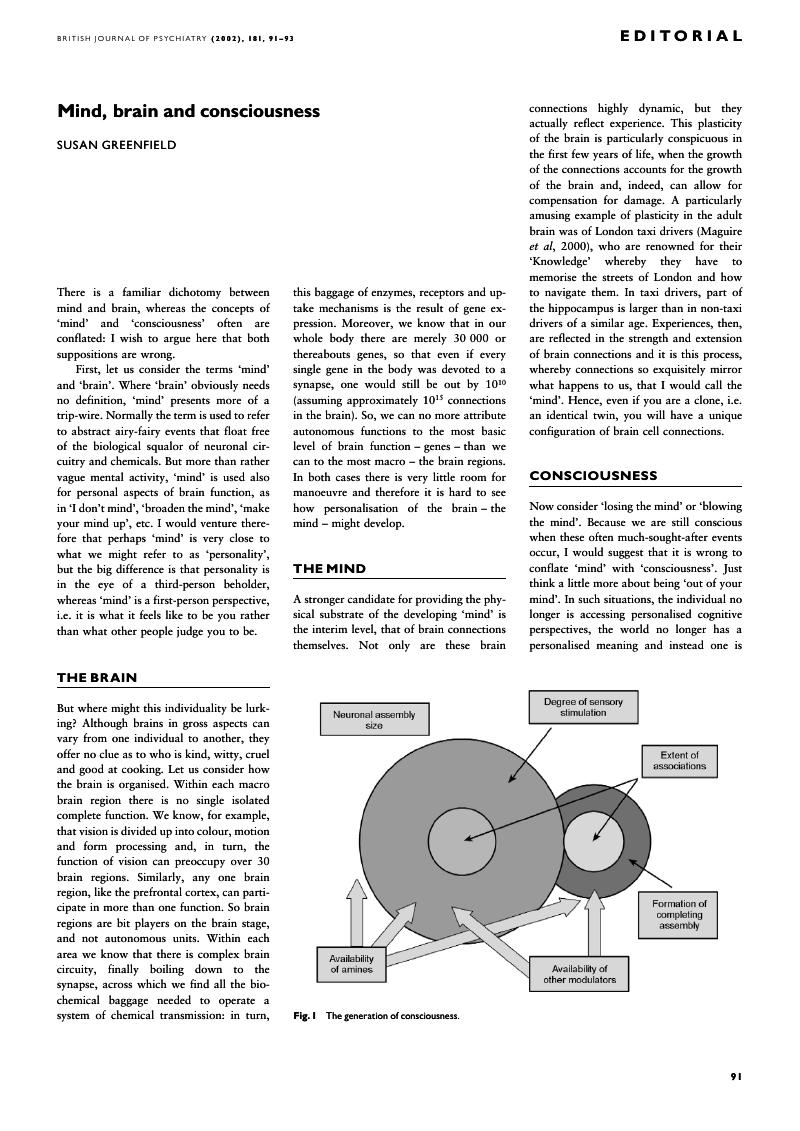 An abstract is not available for this content so a preview has been provided. To view the full text please use the links above to select your preferred format.
Type
Editorials
Information
The British Journal of Psychiatry , Volume 181 , Issue 2 , August 2002 , pp. 91 - 93
DOI: https://doi.org/10.1192/bjp.181.2.91[Opens in a new window]
Copyright
Copyright © 2002 The Royal College of Psychiatrists

There is a familiar dichotomy between mind and brain, whereas the concepts of ‘mind’ and ‘consciousness’ often are conflated: I wish to argue here that both suppositions are wrong.

First, let us consider the terms ‘mind’ and ‘brain’. Where ‘brain’ obviously needs no definition, ‘mind’ presents more of a trip-wire. Normally the term is used to refer to abstract airy-fairy events that float free of the biological squalor of neuronal circuitry and chemicals. But more than rather vague mental activity, ‘mind’ is used also for personal aspects of brain function, as in ‘I don't mind’, ‘broaden the mind’, ‘make your mind up’, etc. I would venture therefore that perhaps ‘mind’ is very close to what we might refer to as ‘personality’, but the big difference is that personality is in the eye of a third-person beholder, whereas ‘mind’ is a first-person perspective, i.e. it is what it feels like to be you rather than what other people judge you to be.

But where might this individuality be lurking? Although brains in gross aspects can vary from one individual to another, they offer no clue as to who is kind, witty, cruel and good at cooking. Let us consider how the brain is organised. Within each macro brain region there is no single isolated complete function. We know, for example, that vision is divided up into colour, motion and form processing and, in turn, the function of vision can preoccupy over 30 brain regions. Similarly, any one brain region, like the prefrontal cortex, can participate in more than one function. So brain regions are bit players on the brain stage, and not autonomous units. Within each area we know that there is complex brain circuity, finally boiling down to the synapse, across which we find all the biochemical baggage needed to operate a system of chemical transmission: in turn, this baggage of enzymes, receptors and uptake mechanisms is the result of gene expression. Moreover, we know that in our whole body there are merely 30 000 or thereabouts genes, so that even if every single gene in the body was devoted to a synapse, one would still be out by 1010 (assuming approximately 1015 connections in the brain). So, we can no more attribute autonomous functions to the most basic level of brain function — genes — than we can to the most macro — the brain regions. In both cases there is very little room for manoeuvre and therefore it is hard to see how personalisation of the brain — the mind — might develop.

A stronger candidate for providing the physical substrate of the developing ‘mind’ is the interim level, that of brain connections themselves. Not only are these brain connections highly dynamic, but they actually reflect experience. This plasticity of the brain is particularly conspicuous in the first few years of life, when the growth of the connections accounts for the growth of the brain and, indeed, can allow for compensation for damage. A particularly amusing example of plasticity in the adult brain was of London taxi drivers (Reference Maguire, Gadian and JohnsrudeMaguire et al, 2000), who are renowned for their ‘Knowledge’ whereby they have to memorise the streets of London and how to navigate them. In taxi drivers, part of the hippocampus is larger than in non-taxi drivers of a similar age. Experiences, then, are reflected in the strength and extension of brain connections and it is this process, whereby connections so exquisitely mirror what happens to us, that I would call the ‘mind’. Hence, even if you are a clone, i.e. an identical twin, you will have a unique configuration of brain cell connections.

Now consider ‘losing the mind’ or ‘blowing the mind’. Because we are still conscious when these often much-sought-after events occur, I would suggest that it is wrong to conflate ‘mind’ with ‘consciousness’. Just think a little more about being ‘out of your mind’. In such situations, the individual no longer is accessing personalised cognitive perspectives, the world no longer has a personalised meaning and instead one is the passive recipient of incoming sensory information. For a participant of a rave, for example, a premium is put on a world stripped of all cognitive content, where the strength of the abstract stimulation — the beat, the music, the heat — is the dominant feature. It is a little like returning to the booming, buzzing confusion of William James's infant. However, consciousness still prevails. What could be happening within the brain? Clearly, the genes have not changed, and nor have the macro brain regions or even the physical and potential connections that make up the ‘mind’: instead it is how the connections are or, more particularly, how they are not being accessed (Fig. 1). 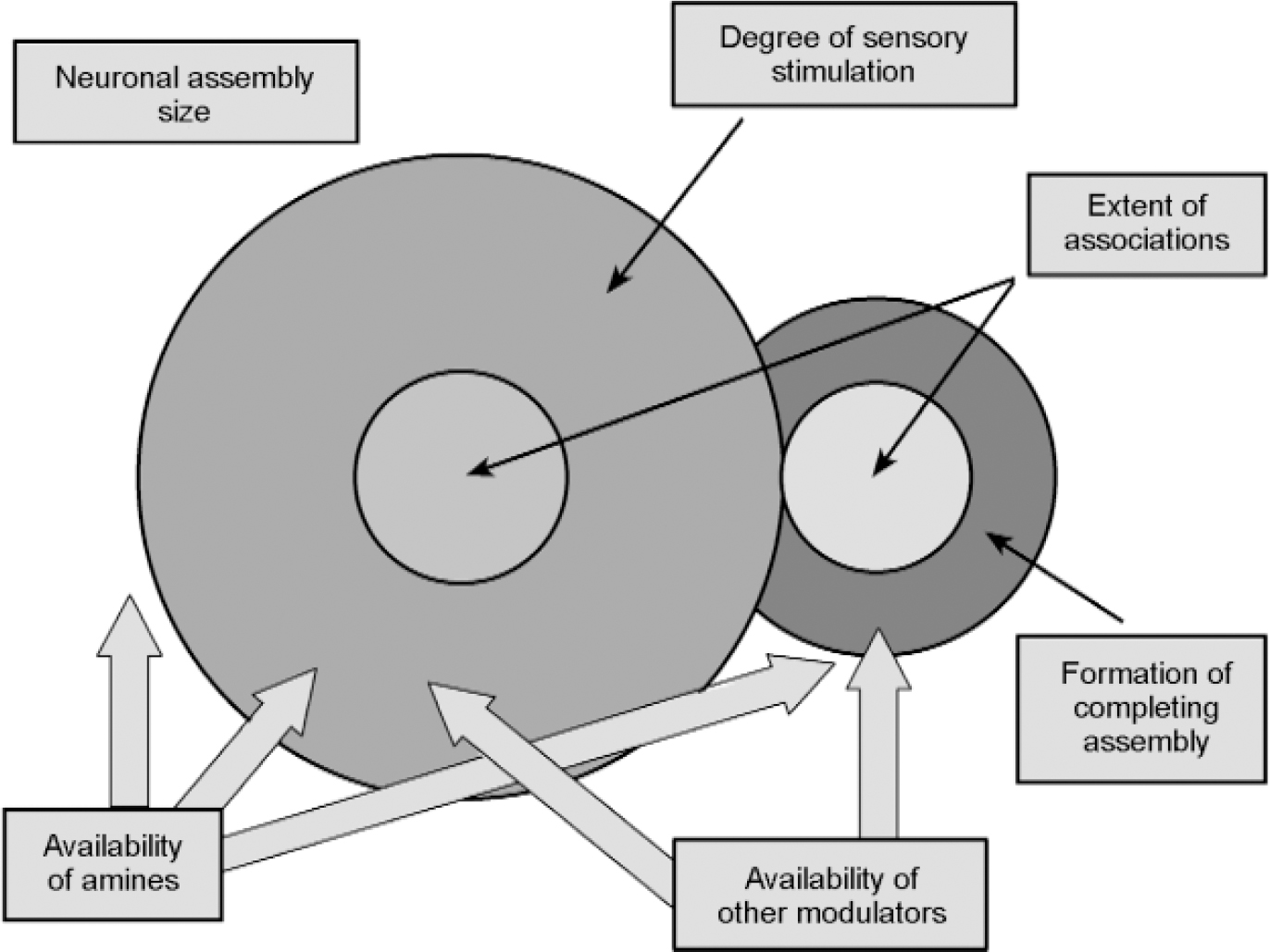 Fig. 1 The generation of consciousness.

The only way one could change states so dramatically would boil down to how easily, or otherwise, one accesses working brain connections, and in turn that would depend on chemicals within the brain. Hence, if we are considering this raw sensory consciousness, we need to consider what transmitters are doing from one moment to the next. Transmitters are best thought of as the essential part of neuronal circuitry, often perhaps erroneously likened to a computer; but we need to remember that certain very well-known transmitters, more particularly the amines (serotonin, histamine, dopamine and noradrenaline) and their chemical cousin acetylcholine, emanate from primitive parts of the brain, almost as fountains, by sending diffuse projections to the higher centres (Reference WoolfWoolf, 1996). We are learning increasingly that these neurons — because of their diffuse projections, dubbed ‘global neurons’ — can act in a modulatory function, i.e. they put neurons on red alert rather than transmit all-or-none signals. In view of the primitive and pervasive locations of these chemical systems, it is perhaps not surprising that they participate in the most basic functions of arousal, sleep, awake and dreaming. I would suggest that the most subtle influences of modulation at the physiological level work perfectly for modulating these phenomenological stages, to predispose cells to working efficiently together or otherwise. If the modulating fountains are malfunctioning, as with the use, say, of ecstasy, then the modulation will not be as efficient as normal and the neuronal circuits will not work together quite so quickly: working assemblies may be smaller. These working assemblies therefore may resemble in size those of a small child, where the connections are simply not there, or, as when dreaming, the lack of a strong sensory stimulation would not recruit a very extensive working assembly of cells.

We might start to see a commonality, therefore, between dreaming, ecstasy-taking and childhood; I would even add schizophrenia where there is an aberration of the dopamine systems and, indeed, where mental status examinations cannot distinguish between the psychotic and dreaming states. It is this condition of an abnormally small assembly of brain cells that I would label the most basic form of consciousness (Reference GreenfieldGreenfield, 2000). Indeed, we can think of consciousness as not so much an all-or-none state but more like a dimmer switch, which grows when the brain grows. It is a state that can be realised or not, according to transient changes in the chemical landscape of our brains. In turn, this chemical landscape can be changed according to our moods or, indeed, to the drugs taken.

The opposite of a small assembly world, I would suggest, is depression: here, instead of being the passive recipient of a pressing sensory world, the outside seems grey and remote and the patient feels cut off. Again, this condition will be associated with an impairment in the amine fountains, particularly serotonin and noradrenaline. It is interesting that, in depression, pain is perceived more acutely (Reference Affleck, Tennen and PfeifferAffleck et al, 1987) whereas in schizophrenia (a small assembly mode) the thresholds are higher (Reference Guieu, Samuelian and CoulouvratGuieu et al, 1994). It may be the case, therefore, that the erstwhile mysterious subjective element to pain perception that occurs, for example, during fluctuations in biorhythms, may be attributable to fluctuating size in a transient neuronal assembly. Indeed morphine, the best-known analgesic, endows a dream-like euphoria and could be working to produce both a lack of pain and, at the same time, a dream-like state by reduction of the working assembly size via endogenous encephalin receptors.

Moreover, if we view pain perception and, indeed, consciousness in terms of size of assembly, it would explain the effects of diverse anaesthetics that are chemically disparate yet, none the less, uniform in their function. Interestingly enough, the early states of anaesthetic induction should correlate with the signs of the small assembly world — perhaps somewhere between the euphoria of the rave and the delirium of the schizophrenia. This is of course exactly what does happen in the early stages of anaesthesia, when we see both delirium and hyperexcitability. One might even add that the euphoria of the pleasure associated with the small assembly world could explain why ether-frolics were so popular, as was the taking of nitrous oxide at fun-fairs in the past.

‘Consciousness’ then, I suggest, can be differentiated from ‘mind’ in that it is the mysterious, subjective, first-person world as it seems to you, one that no one else can hack into. It can, however, be dissociated from the ‘mind’, which also, in turn, could be related closely to the concepts of personality and self-consciousness. What is surprising is that normally the hall-mark of the human condition is to use the mind to a greater or lesser extent throughout the day to interpret the world around us: we have to go to very extreme examples to ‘lose our minds’ or ‘blow our minds’, but it is possible. If we view mind and consciousness as completely distinct but completely rooted in the physical brain, it may be that we have new insights and can think of new ways not just of treating mental disorders but also of reaching towards the most elusive questions concerning human happiness. Just how the water is turned into wine — how the bump and grind of the neurons and the shrinking and expanding of assemblies actually translate into subjective experience — is, of course, another story completely.