Pernicious anaemia presenting as catatonia without signs of anaemia or macrocytosis

Pernicious anaemia can present with psychiatric symptoms before haematological or neurological manifestations appear. We describe a young woman who presented with insidious onset catatonia without evidence of psychosis or depression. Blood count and mean cell volume were normal and neurological findings were equivocal. Low B12 levels and intrinsic factor antibodies were found only by chance when they were included in a battery of further investigations. B12 replacement was followed by prompt improvement. This case provides an argument for wider screening for B12 deficiency in certain individuals with psychiatric disorders.

Psychiatric disturbance was alluded to in Addison's original description of pernicious anaemia, and nowadays the disorder is recognised as being associated with depression, mania, psychosis and dementia. Reference Lishman1 It is also known that psychiatric symptoms can precede the onset of anaemia or neurological features and can sometimes be seen in the absence of macrocytosis. Reference Berry, Sagar and Tripathi2 A case report has recently added catatonia to the list of psychiatric syndromes associated with B12 deficiency. Reference Berry, Sagar and Tripathi2 Here we present a further case, where catatonia was the presenting – and only – psychiatric feature of what turned out to be autoimmune B12 deficiency. Haematological abnormality was absent and neurological abnormality was subtle to the point of being easy to dismiss.

A 27-year-old single croupier and singer of mixed race was compulsorily admitted after she was found to be living in a flat with no heating and electricity. She had stopped working around a year previously and had become withdrawn. There was no previous medical or psychiatric history. In hospital she was noted to be unkempt and vague; she would often stare blankly into space, had no spontaneous interaction with others, and at times was doubly incontinent. However, no affective or psychotic symptoms were elicited. She was treated with olanzapine with slight improvement. She was discharged by a mental health tribunal and then became lost to follow-up.

She was readmitted 6 months later, again in a state of self-neglect. She was very slow to initiate movements, took a long time to get out of bed, and would stand in the same position for long periods in the ward, often with her arms folded across her chest. She also followed members of staff around the ward repeating what they said. During an interview, she spent the whole time sitting in an erect posture in her chair with her hands clasped in a praying position. Her speech was reduced to greetings and giving answers to questions. She showed echolalia. Her affect was impassive and any changes of facial expression were few and slow. As previously, no psychotic or depressive symptoms could be elicited.

Because of the inconclusiveness of these findings, one of the authors (S.J.) undertook a raft of further investigations, including autoantibody screen, thyroid function tests, syphilis serology, serum B12 and folate, and voltage-gated potassium channel antibodies. The only abnormal finding was a low vitamin B12 of 159 ng/l (normal range 189–883 ng/l). Around this time her haemoglobin was 12.7–13.1 g/dl on different occasions, with mean cell volume (MCV) of 86–94 fl (normal range 86–98 fl). Subsequently, antibodies to intrinsic factor were found, and the diagnosis of pernicious anaemia was made.

Olanzapine, which had been recommenced shortly after admission (in addition to diazepam), did not result in obvious improvement over 4 weeks. However, less than 10 days after starting on hydroxycobalamine (intramuscularly, at a dosage of 1 mg on alternate days for 10 days), nursing staff commented on a marked improvement in her behaviour and self-care. Her Addenbrooke's score (on parallel versions of the ACE–R) was 80/100 2 weeks after commencement of treatment and 90/100 4 weeks later. Digit span after 10 weeks of treatment was 6 forwards and 5 backwards and she had improved into the ‘moderate average’ range on the Brixton test (19 errors, scaled score 5); however, she remained in the impaired range on the Hayling Test (33 errors, scaled score 1). As she began to talk more, she described having had pins and needles in her hands and feet for approximately a year, which could have reflected spinal cord demyelination. No abnormalities were found on repeat neurological examination. A repeat CT scan 4 months after institution of B12 replacement continued to show much the same degree of frontal sulcal widening, but was reported as normal.

She discontinued olanzapine 2 months after discharge from hospital. Four months later, after a 2-week delay in administration of her hydroxycobalamine injection, she had a brief, 2-week period of catatonia, which resolved promptly to re-initiation of olanzapine. Currently, she is continuing to receive olanzapine and vitamin B12 injections, is out of hospital, lives independently in her own flat and is planning to enrol in a music course. 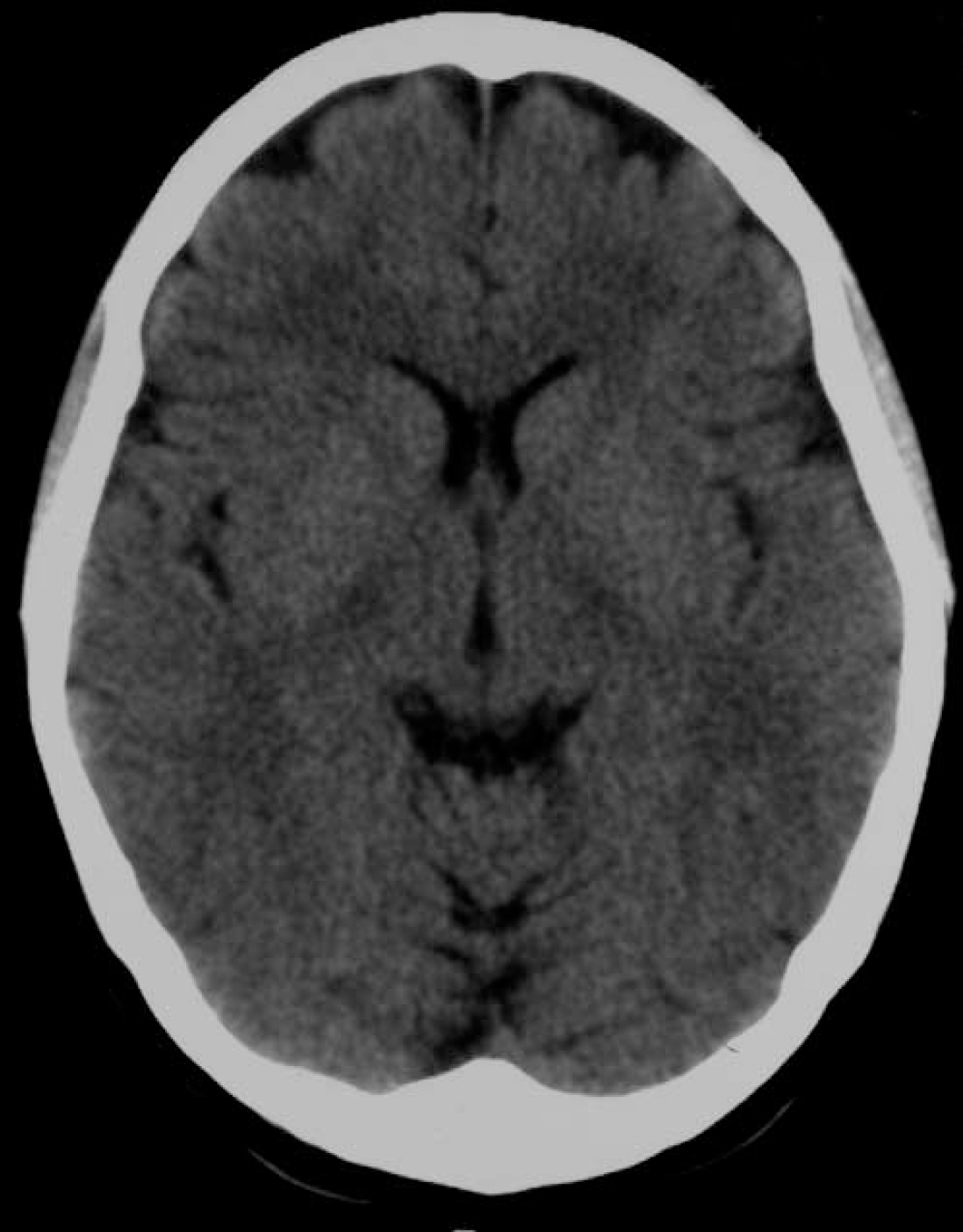 This individual presented with marked social decline, self-neglect and later developed full-blown catatonic symptoms without evidence of psychotic or affective symptoms. Her neurological abnormalities were minimal, and whether there was any abnormality on brain imaging became the subject of debate among the clinicians and neuroradiologists involved in her case. Olanzapine brought about no improvement over 4 weeks but after pernicious anaemia was diagnosed hydroxycobalamine treatment was followed by rapid recovery.

A complicating factor was her relapse after discontinuing olanzapine and recovery after this drug was re-introduced. Two findings, however, argue against her having an independent diagnosis of schizophrenia. First, she did not experienced positive psychotic symptoms for more than 2 years of illness. Second, she originally showed a substantial degree of cognitive impairment, which then improved. This is inconsistent with schizophrenic cognitive impairment, which is now generally accepted as being largely unresponsive to treatment. Reference Goldberg, Goldman, Burdick, Malhotra, Lencz and Patel6 On the other hand, vitamin B12 deficiency can cause cognitive impairment up to and including dementia; Reference Lishman1 the degree to which this improves with B12 replacement is variable, with 1 year having been suggested as a watershed for reversibility. Reference Eastley, Wilcock and Bucks7 Brain changes associated with B12 deficiency are less well documented, with different studies finding no abnormality, cerebral atrophy or leukoencephalopathy, again with varying degrees of reversibility. Reference Vry, Haerter, Kastrup, Gizewski, Frings and Maschke8

This person's lack of anaemia and her (at most) subtle neurological signs meant that vitamin B12 deficiency was not originally screened for. In 1988, Lindenbaum et al questioned the existing orthodoxy that B12 deficiency only presented with neurological disorder when anaemia was also present. Reference Lindenbaum, Healton, Savage, Brust, Garrett and Podell9 They reviewed 141 people who were given a final diagnosis of clinical B12 deficiency-related neurological symptoms and found that 40 (28%) had either no anaemia or no macrocytosis at initial presentation, and that in 19 (13%) both haematological indices were normal. Six further individuals had anaemia, but with an MCV that was normal or low (in four of these there were independent causes for this). In some of these people diagnosis was delayed for several months or years.

This woman's case adds to the literature documenting the occurrence of catatonia in a wide range of systemic diseases, and supports the view that it is an independent psychiatric entity, not one that develops only in the context of a schizophrenic or affective syndrome. Reference Fink, Shorter and Taylor10 It also provides an argument that vitamin B12 deficiency should be considered in any person with an unusual psychiatric presentation, not only when this is ‘organic’, and regardless of the absence of macrocytosis or anaemia. This is particularly important since delayed diagnosis can be associated with lack of reversibility.

We thank the patient for giving permission to publish this case report.

Pernicious anaemia presenting as catatonia without signs of anaemia or macrocytosis
×

Pernicious anaemia presenting as catatonia without signs of anaemia or macrocytosis
×

Pernicious anaemia presenting as catatonia without signs of anaemia or macrocytosis
×
×