Psychotherapy via Skype: a therapist's experience 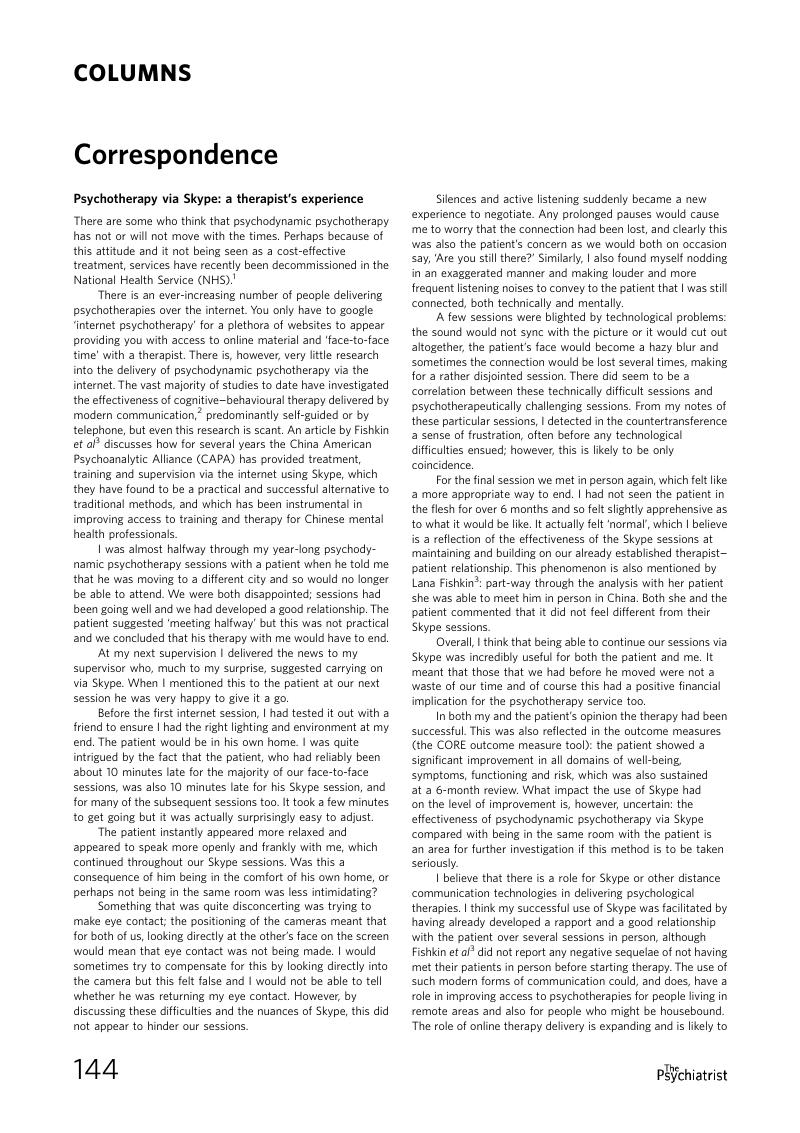 An abstract is not available for this content so a preview has been provided. To view the full text please use the links above to select your preferred format.
Type
Columns
Information
The Psychiatrist , Volume 37 , Issue 4 , April 2013 , pp. 144 - 145
DOI: https://doi.org/10.1192/pb.37.4.144[Opens in a new window]
Creative Commons
This is an Open Access article, distributed under the terms of the Creative Commons Attribution (CC-BY) license (http://creativecommons.org/licenses/by/4.0/), which permits unrestricted re-use, distribution, and reproduction in any medium, provided the original work is properly cited.
Copyright
Copyright © Royal College of Psychiatrists, 2013

There are some who think that psychodynamic psychotherapy has not or will not move with the times. Perhaps because of this attitude and it not being seen as a cost-effective treatment, services have recently been decommissioned in the National Health Service (NHS). Reference Fonagy and Lemma1

There is an ever-increasing number of people delivering psychotherapies over the internet. You only have to google ‘internet psychotherapy’ for a plethora of websites to appear providing you with access to online material and ‘face-to-face time’ with a therapist. There is, however, very little research into the delivery of psychodynamic psychotherapy via the internet. The vast majority of studies to date have investigated the effectiveness of cognitive-behavioural therapy delivered by modern communication, Reference Bee, Bower, Lovell, Gilbody, Richards and Gask2 predominantly self-guided or by telephone, but even this research is scant. An article by Fishkin et al Reference Fishkin, Fishkin, Leli, Katz and Snyder3 discusses how for several years the China American Psychoanalytic Alliance (CAPA) has provided treatment, training and supervision via the internet using Skype, which they have found to be a practical and successful alternative to traditional methods, and which has been instrumental in improving access to training and therapy for Chinese mental health professionals.

I was almost halfway through my year-long psychodynamic psychotherapy sessions with a patient when he told me that he was moving to a different city and so would no longer be able to attend. We were both disappointed; sessions had been going well and we had developed a good relationship. The patient suggested ‘meeting halfway’ but this was not practical and we concluded that his therapy with me would have to end.

At my next supervision I delivered the news to my supervisor who, much to my surprise, suggested carrying on via Skype. When I mentioned this to the patient at our next session he was very happy to give it a go.

Before the first internet session, I had tested it out with a friend to ensure I had the right lighting and environment at my end. The patient would be in his own home. I was quite intrigued by the fact that the patient, who had reliably been about 10 minutes late for the majority of our face-to-face sessions, was also 10 minutes late for his Skype session, and for many of the subsequent sessions too. It took a few minutes to get going but it was actually surprisingly easy to adjust.

The patient instantly appeared more relaxed and appeared to speak more openly and frankly with me, which continued throughout our Skype sessions. Was this a consequence of him being in the comfort of his own home, or perhaps not being in the same room was less intimidating?

Something that was quite disconcerting was trying to make eye contact; the positioning of the cameras meant that for both of us, looking directly at the other’s face on the screen would mean that eye contact was not being made. I would sometimes try to compensate for this by looking directly into the camera but this felt false and I would not be able to tell whether he was returning my eye contact. However, by discussing these difficulties and the nuances of Skype, this did not appear to hinder our sessions.

Silences and active listening suddenly became a new experience to negotiate. Any prolonged pauses would cause me to worry that the connection had been lost, and clearly this was also the patient’s concern as we would both on occasion say, ‘Are you still there?’ Similarly, I also found myself nodding in an exaggerated manner and making louder and more frequent listening noises to convey to the patient that I was still connected, both technically and mentally.

A few sessions were blighted by technological problems: the sound would not sync with the picture or it would cut out altogether, the patient’s face would become a hazy blur and sometimes the connection would be lost several times, making for a rather disjointed session. There did seem to be a correlation between these technically difficult sessions and psychotherapeutically challenging sessions. From my notes of these particular sessions, I detected in the countertransference a sense of frustration, often before any technological difficulties ensued; however, this is likely to be only coincidence.

For the final session we met in person again, which felt like a more appropriate way to end. I had not seen the patient in the flesh for over 6 months and so felt slightly apprehensive as to what it would be like. It actually felt ‘normal’, which I believe is a reflection of the effectiveness of the Skype sessions at maintaining and building on our already established therapist-patient relationship. This phenomenon is also mentioned by Lana Fishkin Reference Fishkin, Fishkin, Leli, Katz and Snyder3 : part-way through the analysis with her patient she was able to meet him in person in China. Both she and the patient commented that it did not feel different from their Skype sessions.

Overall, I think that being able to continue our sessions via Skype was incredibly useful for both the patient and me. It meant that those that we had before he moved were not a waste of our time and of course this had a positive financial implication for the psychotherapy service too.

In both my and the patient’s opinion the therapy had been successful. This was also reflected in the outcome measures (the CORE outcome measure tool): the patient showed a significant improvement in all domains of well-being, symptoms, functioning and risk, which was also sustained at a 6-month review. What impact the use of Skype had on the level of improvement is, however, uncertain: the effectiveness of psychodynamic psychotherapy via Skype compared with being in the same room with the patient is an area for further investigation if this method is to be taken seriously.

I believe that there is a role for Skype or other distance communication technologies in delivering psychological therapies. I think my successful use of Skype was facilitated by having already developed a rapport and a good relationship with the patient over several sessions in person, although Fishkin et al Reference Fishkin, Fishkin, Leli, Katz and Snyder3 did not report any negative sequelae of not having met their patients in person before starting therapy. The use of such modern forms of communication could, and does, have a role in improving access to psychotherapies for people living in remote areas and also for people who might be housebound. The role of online therapy delivery is expanding and is likely to continue to do so. For this expansion to be successful further investigation into its effectiveness is warranted.

Psychotherapy via Skype: a therapist's experience
×

Psychotherapy via Skype: a therapist's experience
×

Psychotherapy via Skype: a therapist's experience
×
×