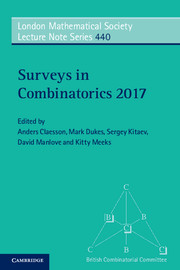 9 - Some applications of relative entropy in additive combinatorics

This survey looks at some recent applications of relative entropy in additive combinatorics. Specifically, we examine to what extent entropy-increment arguments can replace or even outperform more traditional energy-increment strategies or alternative approximation arguments based on the Hahn-Banach theorem.

Entropy has a long history as a tool in combinatorics. Starting with a well-known estimate for the sum of the first few binomial coefficients, some of the classical applications include Spencer's theorem that six standard deviations suffice, which states that given n finite sets, there exists a two-colouring of the elements such that all sets have discrepancy at most; a proof of the Loomis-Whitney inequality, which gives an upper bound on the volume of an n-dimensional body in Euclidean space in terms of its (n - 1)-dimensional projections; or Radhakrishnans proof [33] of Bregman's theorem on the maximum permanent of a 0/1 matrix with given row sums. For a beautiful introduction to these fascinating applications, as well as an extensive annotated bibliography, see [10].

There are other more recent results in additive combinatorics in particular where the concept of entropy has played a crucial role. Notable examples include Fox's improvement [7] of the bounds in the graph removal lemma (see also [30], which appeared in the proof-reading stages of this article); Szegedy's information-theoretic approach [41] to Sidorenko's conjecture (see also the blog post [14] by Gowers); Tao's solution [45] to the Erds discrepancy problem (see the discussion [44] on Tao's blog).

Since the above developments appear to be well captured by discussions online, we shall not cover them in any detail here. Instead we shall focus on a particular strand of recent results in additive combinatorics that could all be described as “approximation theorems” of a certain kind.

The text naturally splits into five parts. To start with we give a very brief introduction to the concept of entropy and its variants, in particular relative entropy (also known as Kullback-Leibler divergence). In Section 3, we state and prove a rather general sparse approximation theorem due to Lee [28].