Race, Nationality, and the Fight for Freedom 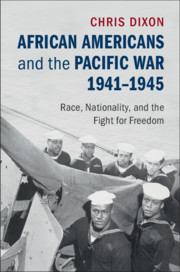 In the patriotic aftermath of Pearl Harbor, African Americans demanded the right to play their part in the war against Japan. As they soon learned, however, the freedom for which the United States and its allies was fighting did not extend to African Americans. Focusing on African Americans' experiences across the Asia-Pacific theater during World War Two, this book examines the interplay between national identity, the racially segregated US military culture, and the possibilities of transnational racial advancement, as African Americans contemplated not just their own oppression but that of the colonized peoples of the Pacific region. In illuminating neglected aspects of African American history and of World War Two, this book deepens our understanding of the connections between the United States' role as an international power and the racial ideologies and practices that characterized American life during the mid-twentieth century.

‘Chris Dixon shines a brilliant new light on how the experience of African American soldiers in the Pacific during World War Two significantly differed from that in Europe. Probing the complexity of how blacks related to other peoples of color in the Pacific, he illuminates the distinctive character of American racism - and its persistence - not only with white American soldiers, but also in interaction with non-whites from other nations.'

‘Chris Dixon is a masterful story-teller and astute historian. He has uncovered a hitherto overlooked story about the role of African Americans during the Pacific War. It is a ‘must-read' for anyone curious about race, sexuality, national identity, and militarism in America during times of war.'

Joanna Bourke - Birkbeck College, University of London and author of Wounding the World

‘In fresh and fascinating detail, Chris Dixon's African Americans and the Pacific War, 1941–1945 reveals the importance of the war in African Americans' long struggle to achieve freedom and equality. Meticulously researched and well written, it is a terrific book.'

Shane White - Challis Professor of History at the University of Sydney, and author of Prince of Darkness

James Westheider - University of Cincinnati, and author of The African American Experience in Vietnam

'Prof. Dixon (Macquarie University) looks at the complex experiences of African Americans in the war against Japan. … This is a very nuanced work.'