The Sources, Character, and Impact of Political Polarization 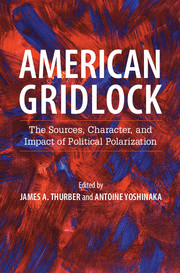 American Gridlock brings together the country's preeminent experts on the causes, characteristics, and consequences of partisan polarization in US politics and government, with each chapter presenting original scholarship and novel data. This book is the first to combine research on all facets of polarization, among the public (both voters and activists), in our federal institutions (Congress, the presidency, and the Supreme Court), at the state level, and in the media. Each chapter includes a bullet-point summary of its main argument and conclusions, and is written in clear prose that highlights the substantive implications of polarization for representation and policy-making. Authors examine polarization with an array of current and historical data, including public opinion surveys, electoral and legislative and congressional data, experimental data, and content analyses of media outlets. American Gridlock's theoretical and empirical depth distinguishes it from any other volume on polarization.

'American Gridlock is a collection of work from some of the best scholars who study American political polarization. These impressive thinkers join together to explore polarization in the US electorate, political institutions, states, and the media, all in one volume. This is a must-have book for anyone interested in American politics in the current era.'

'American politics has become riven by divisions so great and so persistent that they threaten to undermine the ability of elected officials to govern effectively across a wide range of critical public issues. It is a problem that must be solved, and American Gridlock, bringing together the best thinking in the world of political science, makes a major contribution to understanding the root causes of the current polarization and pointing to potential solutions. If we want government to work again, this is a very important book.'

Mickey Edwards - former Congressman and author of The Parties Versus the People: How to Turn Republicans and Democrats into Americans

'American Gridlock is a superb addition to our understanding of partisan polarization in American politics. The breadth and depth of the chapters are remarkable, offering many new insights into the ways in which partisanship has come to shape our polarized nation. No stone is left unturned in this impressive volume.'

'The contributors to American Gridlock illuminate the causes, consequences, and significance of polarization in American politics with the kind of caution and evidence often lacking on the subject.'

'[These] essays transcend assessments of institutional performance based on the number of laws passed and instead evaluate the extent to which legislators produce policies that address major domestic priorities. An analytically astute and deeply sobering account of why a nation that excels in so many other respects today struggles to govern itself.'

'Editors James Thurber and Antoine Yoshinaka frame the right question: even if we take polarization as a given, we still know very little about disagreement manifest itself in different venues, across groups, and in different policy areas … The final insight of this very smart volume lies in its caution about institutional changes that might arrest and reduce polarization.'

'This volume assembles the work of an excellent set of authors who have been studying these developments for some time. Their papers present accessible analysis of what drives polarization, when and how it developed, and how pervasive it is … A highly recommended book for anyone seeking to understand why Americans are so divided … Highly recommended. Lower-division undergraduates through faculty.'

'American Gridlock is an engaging, thoughtful improvement on this dismal picture. … The final insight of this very smart volume lies in its caution about institutional changes that might arrest and reduce polarization.'