Home
The Convent of Wesel

The Convent of Wesel

The Event that Never was and the Invention of Tradition 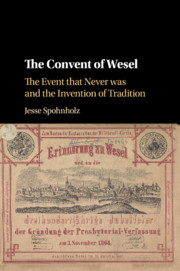 The Convent of Wesel was long believed to be a clandestine assembly of Protestant leaders in 1568 that helped establish foundations for Reformed churches in the Dutch Republic and northwest Germany. However, Jesse Spohnholz shows that that event did not happen, but was an idea created and perpetuated by historians and record keepers since the 1600s. Appropriately, this book offers not just a fascinating snapshot of Reformation history but a reflection on the nature of historical inquiry itself. The Convent of Wesel begins with a detailed microhistory that unravels the mystery and then traces knowledge about the document at the centre of the mystery over four and a half centuries, through historical writing, archiving and centenary commemorations. Spohnholz reveals how historians can inadvertently align themselves with protagonists in the debates they study and thus replicate errors that conceal the dynamic complexity of the past.

'Engaging, thoughtful, and witty, Spohnholz’s unraveling of a historical myth from the Reformation is both a great tale and a timely and insightful consideration of how and why we read and write history. The questions raised by this important book will challenge scholars, teachers, and students seeking to understand the worlds of early modern religion, and unsettle many of our assumptions about our relationship with the past.'

'Jesse Spohnholz tells the story of a document understood to record a heroic moment, as well as a story about how that moment became enshrined in history, that is as gripping as any murder mystery. The Convent of Wesel never happened, but Spohnholz clearly lays out why it was so important for all sorts of people over many centuries to remember a past that did not happen. In our era of fake news and fabricated traditions, The Convent of Wesel provides both a cautionary tale and a defense of the practice of history.'

'Jesse Spohnholz’s lively and detailed explication of the twists and turns of the story of the Convent of Wesel alone would have made this a signal contribution to Reformation and early modern history. But the book is so much more. In sparkling prose studded with penetrating sights, Spohnholz reveals how archives themselves shape evidence and reflects at length on the doing of history. The Convent of Wesel is a must read for all historians and not just for those interested in the Reformation or religious history.'

'… Spohnholz’s book offers a clear methodological challenge to all historians to consider the origins and provenance of their sources with greater clarity, accounting both for the biases of those who created the sources and the biases of those who categorized and archived them. These methodological implications, which stem from the yeoman’s work that Spohnholz has done in tracking the archival history and representations of the Wesel articles, make this book a must read not only for Reformation historians, but for all scholars of early modern Europe.'

'By examining a series of now-obscure divines, archivists, and historians from a critical perspective that helps us understand what they saw and how they influenced later interpreters, Spohnholz convincingly shows why we must consider not only the texts of evidence from the past but also their archival trajectories if we wish to understand their meaning and deploy them as evidence ourselves.'