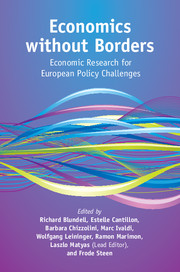 6 - Winners and Losers of Globalization: Sixteen Challenges for Measurement and Theory

View PDF[Opens in a new window]
HTML view is not available for this content. However, as you have access to this content, a full PDF is available via the ‘Save PDF’ action button.

The goal of this chapter is to summarize the state of the art in research in international trade and global production, and discuss issues relevant to European policymakers. Much of recent research on globalization is primarily empirical, owing to the proliferation of available data. We begin by discussing recent advances in measuring the causes and effects of globalization, and discussing the particular data challenges that have emerged. We then turn to theories of trade and global production, first summarizing the conclusions on which there is a broad consensus in the field. We discuss new insights that may be relevant for policy-makers, and open research questions.

The fortune of workers, consumers and firms increasingly depends on other countries. This global interdependence is driven by the flow of goods, capital, ideas and people across countries. This chapter summarizes research about two aspects of globalization: international trade in goods and services, and the international fragmentation of production. We first summarize the overarching themes that are common to both topics. We conclude with a set of open questions, and propose an agenda for better connecting academic research with the needs of policy-making. We also discuss data challenges facing economists and policy-makers alike.

The primary motivation of theories of globalization is to explain how international interactions differ from domestic interactions, and why they occur in the first place. Why do countries trade goods with one another? Why do some companies locate part of their production abroad? Canonical models of trade and globalization explain the magnitude and patterns of cross-country movements, and their welfare implications. An almost tautological conclusion of these models is that if countries choose to interact with one another, they must be better off than being in isolation. Models may differ in the magnitude of the gains from trade they predict, but these gains are almost uniformly positive.

A central theme is that globalization benefits some more than others. In fact, some may even become worse off as their country becomes more open to the flow of goods, ideas, and people. For example, workers in import-competing industries stand to lose when countries open up to trade. These distributional effects of globalization are widely studied both theoretically and empirically.