Home
Epitaph for an Era

Epitaph for an Era

Politics and Rhetoric in the Carolingian World 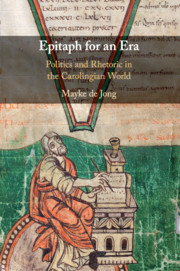 Wala, abbot of Corbie, played a major role in the rebellions against Emperor Louis the Pious, especially in 830, for which he was exiled. Radbert defended his beloved abbot, known to his monks as Arsenius, against accusations of infidelity in an 'epitaph' (funeral oration), composed as a two-book conversation between himself and other monks of Corbie. Whereas the restrained first book of Radbert's Epitaphium Arsenii was written not long after Wala's death in 836, the polemical second book was added some twenty years later. This outspoken sequel covers the early 830s, yet it mostly addresses the political issues of the 850s, as well as Radbert's personal predicament. In Epitaph for an Era, an absorbing study of this fascinating text, Mayke de Jong examines the context of the Epitaphium's two books, the use of hindsight as a rhetorical strategy, and the articulation of notions of the public good in the mid-ninth century.

‘A lively and compelling interpretation of the tumultuous central decades of the ninth century from the vantage point of a single text, the Epitaphium Arsenii, and through the eyes of its fascinating but neglected author, Paschasius Radbertus.’

‘Paschasius Radbertus, one of the most learned figures of the ninth century, applied all of his skills as biblical exegete, rhetorician and political insider to rehabilitate not only the shifting political career of Charlemagne's cousin and his own abbot patron Wala, but his own as well. The resulting text, his Epitaphium Arsenii, was so carefully crafted and directed towards such a small and elite audience at the centre of the Carolingian world that only a scholar as gifted as Mayke de Jong could possibly penetrate the multiple layers of this extraordinary text. Her Epitaph for an Era brilliantly illuminates not only Radbertus's dialogue, but the turbulent reign of Louis the Pious and the dissolution of the Carolingian empire.’

'Mayke de Jong’s book combines readability with profound learning. She proffers an insider’s feel for what until recently were understudied fields. Ranging 'between the cloister and court', she probes deep into the cultures of both. As classical rhetoric jostles with dialogues, the past arcane becomes today’s relevant.'

‘It is therefore a stroke of luck that Mayke de Jong, the historian who corrected the negative image of Ludwig the Pious in a groundbreaking biography, is now also presenting a monograph on the Epitaph of Paschasius Radbertus … with the same empathy with which she made the actions of Ludwig the Pious understandable against the background of the challenges of his time, she now devotes herself to the most important written justification from the camp of his opponents.’

‘Epitaph for an Era brings us the perspective of an empire’s stakeholders … her book should appeal as much to historians of religion as to those of politics and provides a model for those wishing to combine both with in-depth literary analysis.’

‘De Jong’s Epitaph for an Era brings Radbert’s rich and understudied literary art fully into the current scholarly conversation, and we are very much the better for it. The book contributes enormously to ongoing debates that will be of interest to any medievalist-debates about Carolingian identity, the transformations of the late antique world, and the birth of ‘medieval’ European ideologies. Paired with its companion translation it promises to contribute even more.’

‘De Jong synthesises political and literary analysis in exemplary fashion, showing how Radbert adopted and adapted principles of rhetoric in his defence of Wala and, by extension, himself.’

‘In Epitaph for an Era, Mayke de Jong, who has published extensively on the Carolingian world, provides an exemplary study of the Epitaphium Arsenii and its author. De Jong shows that the Epitaphium is not only a fascinating text in its own right, it is in many ways emblematic of an era and its way of thinking.’