The Transnational History of a Political Idea 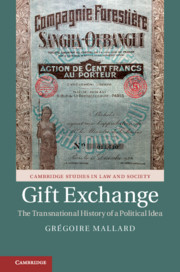 Since Marcel Mauss published his foundational essay The Gift in 1925, many anthropologists and specialists of international relations have seen in the exchange of gifts, debts, loans, concessions or reparations the sources of international solidarity and international law. Still, Mauss's reflections were deeply tied to the context of interwar Europe and the French colonial expansion. Their normative dimension has been profoundly questioned after the age of decolonization. A century after Mauss, we may ask: what is the relevance of his ideas on gift exchanges and international solidarity? By tracing how Mauss's theoretical and normative ideas inspired prominent thinkers and government officials in France and Algeria, from Pierre Bourdieu to Mohammed Bedjaoui, Grégoire Mallard adds a building block to our comprehension of the role that anthropology, international law, and economics have played in shaping international economic governance from the age of European colonization to the latest European debt crisis. This title is also available as Open Access on Cambridge Core.

'Against the usual view of Marcel Mauss as an armchair anthropologist, secluded in the higher reaches of the academia, Grégoire Mallard explores the many social milieus in which Mauss operated, including early twentieth-century socialist politics, journalism, high finance, and the emerging state technocracy. Mallard shows how Mauss’s classic essay, The Gift, offered a complex worldview that had a profound influence on generations of politicians and public intellectuals involved in everything from the debate on German reparations to pre-war colonial politics in France, the North-South conflict post-1960, and current sovereign debt issues. In short, this is a most remarkable book, extremely well researched and elegantly written.'

'Original and very well documented, Grégoire Mallard’s book is a masterpiece at the confluence of many disciplines: history of ideas, anthropology, sociology, and political science. Mallard offers a new interpretation of Marcel Mauss’s The Gift while linking the two sides of his work, his anthropological essays on exchange and reciprocity, and his political reflections on nation, peace, and war.'

Marcel Fournier - University of Montreal and author of Marcel Mauss: A Biography

'This book is a gem. It is full of insights about a topic - sovereign debt crises - that is, unfortunately, timely. Professor Mallard’s insights about Mauss and gift exchange, and their relationship to key events in the history of sovereign debt resolution were stunning to me. For those interested in the meaning of sovereignty in the post-colonial era, this is a must read. Plus, it is fun.'

'Grégoire Mallard offers an extraordinary exploration of the ongoing relevance of Mauss’s The Gift both to scholarship and, above all, to political life, during the mid-twentieth century. Mallard tracks Mauss’s concepts and influence through the creation of new interdependences, the re-emergence of attention to the local, and the creation of new trade conventions. He includes themes that English-speaking readers may know very little about due to the centrality of French post-colonial life, such as the ongoing relations of France and Algeria. A remarkably original resource and inspiration.'