Third World Interventions and the Making of Our Times 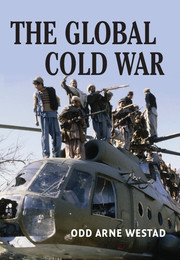 The Cold War shaped the world we live in today - its politics, economics, and military affairs. This book shows how the globalization of the Cold War during the last century created the foundations for most of the key conflicts we see today, including the War on Terror. It focuses on how the Third World policies of the two twentieth-century superpowers - the United States and the Soviet Union - gave rise to resentments and resistance that in the end helped topple one superpower and still seriously challenge the other. Ranging from China to Indonesia, Iran, Ethiopia, Angola, Cuba, and Nicaragua, it provides a truly global perspective on the Cold War. And by exploring both the development of interventionist ideologies and the revolutionary movements that confronted interventions, the book links the past with the present in ways that no other major work on the Cold War era has succeeded in doing.

'This is a genuinely 'international' history … few genuine research monographs are so wide ranging chronologically and geographically, while also trying to absorb insights from sociology and social anthropology … taken as a whole no historian has dealt with the links between the Cold War so fully, so broadly and so thoughtfully as Westad in this new account … a truly seminal work, whose findings will exercise those researching the Cold War for many years.'

'The Global Cold War is a powerful account of the way in which the third world moved to the center of international politics in the closing decades of the 20th century. Drawing on a stunning multiplicity of archival material, Odd Arne Westad integrates perspectives and disciplines which have, until now, remained separate: US and Soviet ideologies, their politics and the interventions that flowed from both; insurrection, rebellion, revolution and the power of competing models of development, systems of support or subversion (sometimes synonymous) that in part determined their outcome. Westad writes with the combination of clarity, wit and passion that have always characterized his work. This time the canvas is large enough to do full justice to his scholarship and his humanity.'

'Odd Arne Westad's new book is an extremely important contribution to the historiography of the Cold War. With broad erudition, amazing geographical range, and inventive research in archives around the globe, Westad tells the tragic story of the United States and Soviet Union's involvement in what became the 'Third World'. The newly emerging nations of the 'South' - of Africa, Asia, and Latin America - barely emerged from their humiliating subservience to European colonialism before being dragged by Cold War rivalries into ideologically-inspired upheavals that ended up bankrupting their countries and devastating their peoples. Westad's study enables his readers to integrate the Third World into the history of the Cold War and confronts them with the meaning of intervention in the past for the international system today.'

'In a reinterpretation of the Cold War that is as thorough as it is important, Westad places Soviet and American interventions in the Third World at the center of their struggle. Driven by ideology and the need to affirm the rightness of their principles, both superpowers felt compelled to contest with the other in areas of little intrinsic importance. The results were almost uniformly failures, and in the process brought much sorrow and destruction to the Third World. The picture is not a pretty one, but Westad shows that studying it reveals much about the Cold War, and about the current world scene.'

'Based on prodigious research, this ambitious and wide-ranging book presents the most important account to date of the Cold War in the Third World. Westad's study represents broad-based, international history at its best. He deftly weaves together the tale of world politics writ large with stories about variegated processes of revolution and social change across the Third World. This should prove an indispensable work for anyone interested in the history of the twentieth-century.'

'For the serious student of our times Odd Arne Westad's The Global Cold War could provide a serious weapon for their scholastic arsenal.'

'… Westad's work combines sophisticated analysis, insight into the motivations and behaviours of non-Western actors, historical perspective, fair-mindedness and a sympathy for the victims on all sides. Westad's pioneering work in Soviet archives means that his book illuminates better than any other work I have read in English the thinking and motivations of the Soviet leadership and its advisers when it came to the Third World.'

'… Westad presents a finely crafted and immaculately researched study that presents some of the findings from the archives of the former Soviet Union and its communist allies alongside the more familiar American and western sources.'

'There are already a number of books on the Cold War, and more are likely as more information becomes available. This work will remain important, however, for shifting the focus away from Europe and North Korea, to the wider world in which the superpower struggle took place. It is well written and draws on a wide range of materials. Many will not agree with all the arguments, but it is a major contribution to our understanding of how the world became as it is.'

'Westad's brilliant, bitter account, based on prodigious research, is an indictment of the superpowers. They treated the Third World as their playground and left it devastated.'