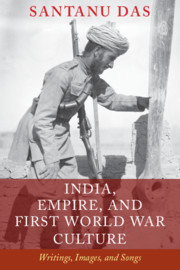 Based on ten years of research, Santanu Das's India, Empire, and First World War Culture: Writings, Images, and Songs recovers the sensuous experience of combatants, non-combatants and civilians from undivided India in the 1914–1918 conflict and their socio-cultural, visual, and literary worlds. Around 1.5 million Indians were recruited, of whom over a million served abroad. Das draws on a variety of fresh, unusual sources - objects, images, rumours, streetpamphlets, letters, diaries, sound-recordings, folksongs, testimonies, poetry, essays, and fiction - to produce the first cultural and literary history, moving from recruitment tactics in villages through sepoy traces and feelings in battlefields, hospitals, and POW camps to post-war reflections on Europe and empire. Combining archival excavation in different countries across several continents with investigative readings of Gandhi, Kipling, Iqbal, Naidu, Nazrul, Tagore, and Anand, this imaginative study opens up the worlds of sepoys and labourers, men and women, nationalists, artists, and intellectuals, trying to make sense of home and the world in times of war.

‘India, Empire and First World War Culture is an astonishing achievement, an amazing feat of scholarship that unearths an extraordinary range of sources and fragments. Through close and sensitive readings of poems, songs, paintings, photographs and a diverse range of objects, Santanu Das succeeds in unmuting a vast host of voices that have for far too long been silenced or forgotten. Rarely have the skills of the literary critic and historian been as imaginatively fused as in India, Empire and First World War Culture.’

‘In Santanu Das’s brilliant book, we can feel the real bodies of the men from India mobilised during the Great War through the traces of touch and intimacy they left behind. His beautiful and moving study brings to us what he terms echoes of the Sepoy’s heart. To do so, he uses an astonishing array of sources, moving with grace from the textual and the testimonial to the visual, the tactile, and the oral. Here is a book that not only adds substantially to what we know about the 1914–18 conflict, but brings out as well with affection and wit the sheer humanity of these soldiers and the world they left behind.’

‘Das brilliantly combines two approaches - ‘a redefinition of the archive’ and close, attentive reading … Das proves that detective work pays off but it is how he reads these treasures that is compelling. Thrillingly, this close reading elevates some of Das’s protagonists to a form of equality with the traditional First World War canon, to a kind of parity with Owen and Sassoon.'

'Monumental … Those interested in First World War history and literature will find in Das’s narrative a beauty and sensitivity, drawing as it does on stories of compassion in the midst of the shelling. Combined with meticulous research and scholarship, it makes this densely printed 417-page book a compelling read.’

'Remarkable, compendious … Das’s capacity to read into the finest interstices of lost, buried, and misplaced war archives mean that his book is already being recognized - and justly so - as one of the most important interventions in both fields that we have yet seen.’

‘[A] rewarding [account] of one of the empire's most remarkable institutions …’

‘Santanu Das’s book is remarkable for lacking regional loci - its cosmopolitanism and liberalism in choosing multi-lingual and regional sources is one of its strongest features. The book’s signal contribution has been its success in reminding readers that legacies of wars reside in the social and cultural, and not always in the political or constitutional hallways of history … Das has written a book of immense significance … It will encourage the next generation of scholars to abandon the crutches of disciplinary certainties … [for] the promise of a dazzling array of new scholarship that knits visual, textual and literary sources together to produce stirring accounts of past events.’

‘The book is a benchmark in placing the unexamined colonial histories at par with the far better understood cultural historiography of the Western participants. His examination of the use of war memory and commemoration in the recent past is outstanding for the questions it raises … The work is breathtaking in its scope and depth and is an invaluable addition to Indian writings on the war.’

‘A uniquely moving and extremely original study, the book not only provides the first cultural and literary history of India and the First World War, but also sets a new standard for interdisciplinary scholarship in the fields of literary and cultural studies … Das reveals a more intimate history of experience, thought, and feeling, wherein we can indeed hear, palpably, what he terms the ‘echoes of the sepoy’s heart.’

‘Magisterial … more than the sheer staggering variety and bewildering richness of the material assembled by Das is the acuity and nuance he brings to his examination of individual objects, which then enables him to make larger arguments about the way in which the First World War operated in and through the bodies, minds, and hearts, of those who took part in it.’

‘An immensely powerful book that will be important for years to come.’

‘Magisterial … by closely reading his manifold sources, Das exhumes what he calls 'a texture of experience and feeling' that pushes us to rethink historiography, especially the role played by memory … By looking through the sepoy’s eye, he offers illuminating insights into the deeper provocations behind their recruitment, those that went beyond the script of valour and the glory of martyrdom touted by the political leaders.’

‘In the deluge of books, articles, exhibits, films, and commemorative events during and around the years of the centenary of the Great War, Das’s book stands out as one of the most important, exhaustively researched, and exquisitely rendered interventions. It will instantly become, and will remain, a classic in the field of First World War studies. But more, it is an important contribution to the history of modern South Asia, and an inspiring example of how historians may attempt to recover, present, and understand the histories of colonized peoples even in the absence of plentiful sources of the kinds historians usually use to do their work’

‘Das’s magnificent India, Empire, and First World War Culture: Writings, Images, and Songs brings together a decade of pioneering research on the Indian involvement in the war.’

‘Santanu Das shows how rich are the rewards for those who dig and delve, who look for meaning in tiny fragments of evidence … Drawing on a decade of such fieldwork, Das has made a forensic examination of hundreds of pieces of evidence - memoirs, letters, photographs, oral testimony, songs, pamphlets, poems, novels … this is his answer to the gap in our understanding … a lesson both in the close reading of sources and in how literary and historical studies can enrich each other.’