Trade and Faith on the Medieval Malabar Coast 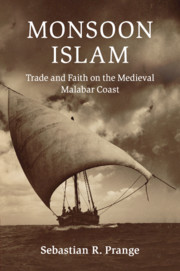 Between the twelfth and sixteenth centuries, a distinct form of Islamic thought and practice developed among Muslim trading communities of the Indian Ocean. Sebastian R. Prange argues that this 'Monsoon Islam' was shaped by merchants not sultans, forged by commercial imperatives rather than in battle, and defined by the reality of Muslims living within non-Muslim societies. Focusing on India's Malabar Coast, the much-fabled 'land of pepper', Prange provides a case study of how Monsoon Islam developed in response to concrete economic, socio-religious, and political challenges. Because communities of Muslim merchants across the Indian Ocean were part of shared commercial, scholarly, and political networks, developments on the Malabar Coast illustrate a broader, trans-oceanic history of the evolution of Islam across monsoon Asia. This history is told through four spaces that are examined in their physical manifestations as well as symbolic meanings: the Port, the Mosque, the Palace, and the Sea.

‘No one can read this insightful monograph without recognizing the Indian Ocean as a major not a minor, a central not a peripheral, theatre of Islamicate civilization. Monsoon Islam deserves, and should attract, a wide readership in Asian history and comparative history but also civilizational studies broadly conceived.'

‘With meticulous attention to both the material and discursive dimensions of medieval Muslim settlement in Malabar, Sebastian R. Prange combines manuscript, architectural and epigraphic evidence of India's role in the twinned maritime traffic of goods and gods. This book marks an important milestone for the study of Islam in the Indian Ocean and India alike.'

‘Moving deftly between the port and the sea, the mosque and the palace, Sebastian R. Prange has produced the best study of trade, religion and sovereignty on the Malabar coast in the pre-modern era since Ashin Das Gupta's classic monograph on the subject. Monsoon Islam provides a nuanced understanding of a much misunderstood faith - one that was gently shaped by the Indian Ocean environment inhabited by merchants and mystics.'

‘With a refreshing sense of excitement, this book retraces the history, and ransacks popular misperceptions, of how Muslims from South India made and remade Islamic doctrine and ideology. This richly insightful study is a treasure for Indian Ocean studies in general and South Asian history in particular.'

‘Monsoon Islam gives us a world in motion, one of pepper and patronage, Sufis and shari`a, pirates and warriors, that flourished between and in the trading ports of the medieval Indian Ocean. This engaging study shows us Islamic cultural forms from law to architecture taking new shape particularly in the eventful world of coastal Malabar. The book is a pleasure to read.'

'This is the first academic attempt to analyze Islam through the lens of a weather pattern. … By all readings, Prange’s analysis is a success.'

'Monsoon Islam makes a major contribution to Indian Ocean historiography with its rich account of Muslim merchant communities and trading networks. It presents excellent economic as well as political and social history. It depicts a period of world history and a part of the world in bright rich colours that they well deserve.'

'[Prange] scours a stunning range of sources from Arab travel accounts, to Sanskrit chronicles, to epigraphic and archaeological evidence, to assemble a coherent picture of Islam and trade across the ocean. The triumph of Monsoon Islam is in dredging these vast depths to discover the few stray pearls of information and then stringing these together to enrich our understanding of this world. … By engaging with these disparate works, Prange puts forward bold new arguments about the spread of Islam, pre-modern empires and even the operation of caste hierarchies in Malabar.'

'Sebastian Prange’s Monsoon Islam provides a fascinating, rich and well-written account of the maritime networks that shaped the South Indian region of Malabar as part of the wider Indian Ocean world during the 12th to 16th centuries … Prange is able to carve out an intriguing historical trajectory with its various economic, religious and political facets. This book promises to be transformational for the analysis of Islamicate societies and constitutes a provoking contribution to the study of medieval and early modern Islamic history beyond the Middle East.'

‘Prange presents here a landmark contribution to the history of Islam in the Indian Ocean world, working through a wealth of previously understudied material and bringing together considerations of both local sources and material from the broader networks within which Malabar was situated to reveal complex historical processes … Prange’s book thus constitutes an exciting intervention into both Islamic and Indian Ocean Studies that should stimulate new conversations and animate innovative work in both fields over many years to come.’

‘Monsoon Islam brings together various strands of historiography to present a comprehensive picture of the social, political, commercial, and cultural experience of Muslims on the Malabar coast.'

‘[Prange] has brought scrupulous multilingual scholarship to difficult questions of history, identity, and myth and his book deserves to be widely read.’