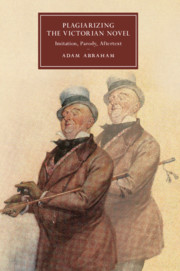 How can we tell plagiarism from an allusion? How does imitation differ from parody? Where is the line between copyright infringement and homage? Questions of intellectual property have been vexed long before our own age of online piracy. In Victorian Britain, enterprising authors tested the limits of literary ownership by generating plagiaristic publications based on leading writers of the day. Adam Abraham illuminates these issues by examining imitations of three novelists: Charles Dickens, Edward Bulwer Lytton, and George Eliot. Readers of Oliver Twist may be surprised to learn about Oliver Twiss, a penny serial that usurped Dickens's characters. Such imitative publications capture the essence of their sources; the caricature, although crude, is necessarily clear. By reading works that emulate three nineteenth-century writers, this innovative study enlarges our sense of what literary knowledge looks like: to know a particular author means to know the sometimes bad imitations that the author inspired.

'Focused on three important Victorian novelists, Charles Dickens, Edward Bulwer Lytton, and George Eliot … Plagiarizing the Victorian Novel is an illuminating, stylish, and necessary archeology of some of these lost works.’

‘Abraham’s book, among its other aspects, demonstrates a seismic shift in English studies over the past half-century. Plagiarizing the Victorian Novel presents itself as part of a specialism-wide, co-operative effort.’

‘Plagiarising the Victorian Novel makes a useful contribution to the ongoing conversation surrounding forms of textual afterlife, recognizing the productive overlap between issues of plagiarism and those of identity, fraud, agency and intent …’

‘… the book makes for pleasurable reading. Abraham’s prose is clear, witty, jargon-free, and the work he has done on these aftertexts, including his concise summaries, will provide future scholars with rich new material for years to come.’