The Political Economy of Health and Wealth 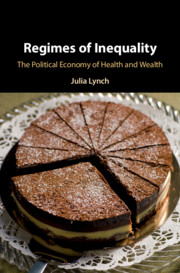 ‘This book provides a much-needed critical assessment of widespread, but largely unsuccessful, efforts to tackle health inequalities. It should cause those involved in developing policy responses to health inequalities, as well as those trying to influence these responses, to reflect on what they are proposing and why. As Lynch concludes, the policy levers for tackling inequality are clear; the question is whether policymakers are bold enough to use them.'

‘An insightful and novel analysis of the evolution of health inequalities policies in Europe from the leading political scientist in the field. An important read for the global public health community.'

‘This book is a milestone in research on why public policy has failed to reduce health inequalities. Many researchers now lay claim to political economy perspectives on this topic; Professor Lynch is one of the few who live up to the claim. Using analytical tools of political science that are often neglected by academic followers of fashion, she examines multiple case studies based on a sophisticated understanding of the evidence base that connects health inequalities with their economic substrates. A must-read for all scholars, practitioners and advocates concerned with this topic.'

'Lynch’s book brings political science to a field of public health advocacy and policy that desperately needs it, showing the health inequalities world their existential challenge while bringing a central concern of the last three years of social policy into debates about inequality and politics that somehow missed it. Nobody will fail to learn from this book. Nobody will escape being challenged by it. And if there is such a person, they can still learn about how to write clearly across countries, disciplines, and ideas. Inequality is a focus of political scientists and economists today, but politically engaged health researchers got there thirty years ago. Lynch’s book chronicles the effort to make health inequalities a lever to change politics. Their failures, and occasional successes, should shape our thinking about how to put inequalities onto political agendas.'

'Julia Lynch has written an extremely clever and timely book … Building on a formidable scholarly profile, she provides an original and often brilliant account of how health and wealth are not only closely related in modern democracies, but constitute distinct regimes and patterns of inequality across these states … Regimes of Inequality is a superbly written and cogently argued book which will rapidly become required reading for scholars of comparative politics.'

'In this eloquent and meticulously researched book, Julia Lynch shows that health outcomes in advanced countries are inextricably linked to broader patterns of social and economic inequity. Equally important, she demonstrates that these patterns are not inexorable products of impersonal economic forces, but rather stem from political choices. For Lynch, then, the pathologies of health inequality are not fundamentally economic or physiological, but political. A deeply impressive achievement that revamps our understanding of the relationship between health and wealth and the implications of this relationship for capitalism and democracy.'

'While inequalities are so prominent in the political and academic agenda, very few books are able to trace the politics of inequalities as this book does. Lynch takes an original and definitively convincing approach to show how studying the policy-making surrounding health inequalities provides us with an understanding of how and why inequalities have increased so much since the 1980s.'

'Lynch’s splendid book has effectively rewritten much of the literature on the welfare politics of advanced industrial democracies and reminds us that the contemporary story of rising and politically disruptive inequalities is one that we have collectively written for ourselves and could, with the right admixture of courage and political will, rewrite in turn.'